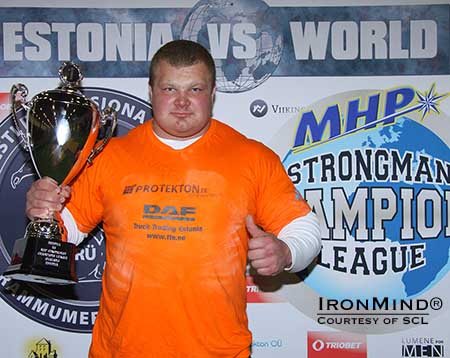 The competition took place Saturday in Tallinn, which is the capital of Estonia, in a sports arena. This was the first time that top strongman athletes have been seen in the country and of course it pulled in a lot of media attention before the competition and during the event.

Six Estonian athletes and six international athletes competed as team and also for individual places in total of six events.

Medley
This was an Team event where the whole team was competing. First athlete had to walk 25m with 150-kg Farmer’s Walk and then tapped a team member who took 125 kg and ran 25 m to the platform.  The third part was a 400-kg tyre flip with 4 flips. This was repeated twice, so all 6 team members did their share. The winner was Estonia. The MHP team lost one athlete, Antti Mourujärvi, who tore his bicepts in last part Tyre Flip. This is unfortunate but seems very common in our sport. He will be back 2014 and we all wish him a good recovery. Estonia team 2 points, MHP team 1 point.

After this, the contest continued as an individual competition.

Viking Press: 165-kg
This was easy victory for Krzysztof Radzikowski, who did 15 reps and showed that he is one of the best pressers in world. Second was Ervin Katona with 13 reps.

Special Thanks to Rammumeeste organisation (Marek & Janek Tobi) who did excellent job pulling out the first big international strongman competition in Estonia. Next year we will be back with even bigger show in Estonia.

The the team title with 204 points versus the MHP SCL Team 182 points.