Tied going into the last event—the 56-lb. weight for distance—things were straightforward for Americans Matt Vincent and Dan McKim: whichever of them beat the other in this event would be the 2014 David Webster Highland Games Heavy Events world champion. 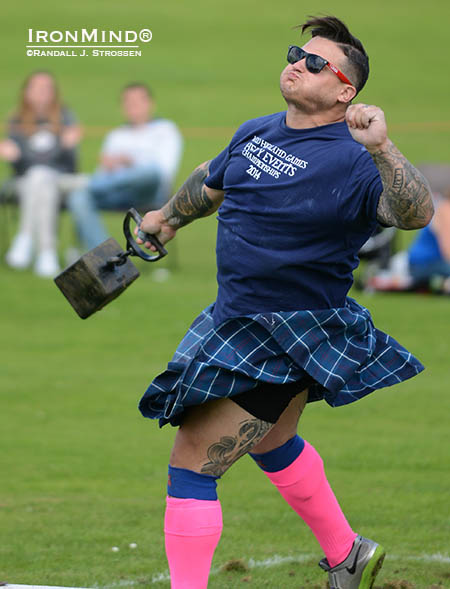 Matt Vincent on the 56-lb. weight for distance yesterday at the David Webster Highland Games Heavy Events World Championships, where he won the event and the title. IronMind® | Randall J. Strossen photo

“It doesn’t get any better than this,” Vincent said, as the two men who have traded top top titles back and forth in recent years, were neck and neck with one event to go.  McKim, quick to congratulate Vincent on his victory later said, “I dug myself into a big hole yesterday,” referring to his third-place position at the end of the first day of competition.

Vincent was leading after day one, followed by Scott Rider, with McKim trailing Vincent by 3 points.

Set in Pittencrieff Park in Dunfermline (“The Kingdom of Fife”), Scotland, next to the Abbey where Scottish king Malcolm Canmore is buried, the competition had a number of highlights, including a putt by Burger Lambrechts of South Africa that while foul, was over 67’.

There had been talk of including two scoring cabers in the contest, but then it was decided that Sunday’s caber would be a challenge caber and not included in the scoring for the title.

Vincent, McKim and Rider are set for a rematch this coming weekend at the US Invitational Heavy Events Championships in Pleasanton, California.