Vlad Redkin reported to IronMind that the 2013 Olonholand Cup, an international Mas wrestling tournament, will be held on June 3 in Yakutsk, Russia. 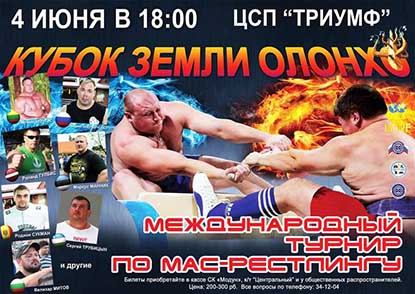 Vlad Redkin, the man who introduced mas wrestling to strongman, has announced the 2013 Olonholand Cup in Yakutsk, Russia.  IronMind® | Image courtesy of WSF.

Also, Redkin reported that Sergey Trubicin won US$2000 for his victory at the first stage of the WSF (World Strongman Federation) Proform World 2013 in Tashkent, Uzbekistan.  Rafal Kobylarz won US$1500 for second place and Olexander Lashyn won US$1000 for third place.

On June 23, Redkin said the WSF European Championships will be held in Poland.