“Finally, after 13 stages of SCL this year, it will come to an end,” Strongman Champions League co-founder Marcel Mostert told IronMind. 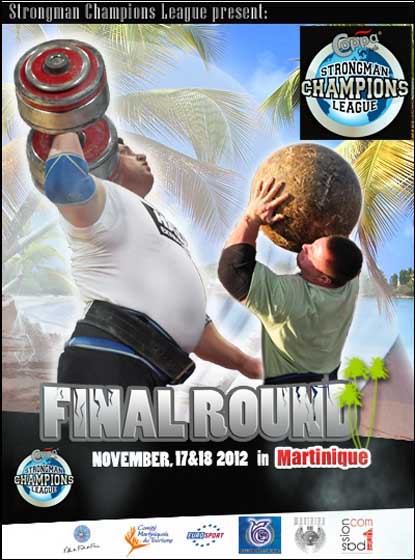 In terms of its global reach and the frequency of its top level strongman contests, SCL is the world leader, and its 2012 season comes to a close this weekend in Martinique.  IronMind® | Artwork courtesy of SCL.


No, the wheels are not coming off the car—it’s been building up steam since its inception and SCL stands as the undisputed worldwide leader in terms of the number of high-level strongman contests held under its banner.

The end that Mostert is talking about is the grand finale of the 2012 SCL season  and the Coppa Cocktails Strongman Champions League Finals will be held November 16 –18 in Martinique.

“Zydrunas Savickas, Misha Koklyaev and Ervin Katona will all fight until the bitter end for a good placing,” said Mostert.
“Also Krzysztof Radzikowski, Jarno Hams, Etienne Smit, Tomi Lotta and Lauri Nami will be there.  Together with 2 athletes from Martinique, it is a perfect field for a great final.

“And after that, the SCL board will have a nice holiday, together with the athletes who deserved this after a long season,” Mostert said.  IronMind translated this to mean: World Championship Caribbean After Party.

Stay tuned for the results.