Mark Felix will be making his WSMSS debut in Poland, where he hopes to qualify for the 2006 MET-Rx World's Strongest Man contest. 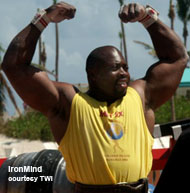 Mark Felix, the Grenadian strongman who will be competing in the upcoming WSMSS Polish Grand Prix, appears primed for a top performance. IronMind® | Photo courtesy of TWI.

Speaking of World's Strongest Man, Colin Bryce said, "Mark Felix won the deadlift in the heats, but failed to make the final. He is coming to Poland to try and get a crack at qualifying for the WSM one more time. He is in great shape and pulling record deadlifts in the gym - 400 kg."

This is big news because, "Deadlift for reps is one of the events in Poland," Bryce explained, "and Mariusz hasn't lost at all this season, so will this be the first time he gets beaten on home soil? Mark thinks he will."

The WSMSS Polish Grand Prix is scheduled for August 12 and it is the last qualifier for the 2006 MET-Rx World's Strongest Man contest.