Chelyabinsk, Russia hosted “a battle of two strong women,” Sergey Klimakov reported to IronMind, as Uralstrong Federation staged a two-event strongwoman showdown between Marina “The Armor” Kigileva and Aneta Florczyk this past weekend. 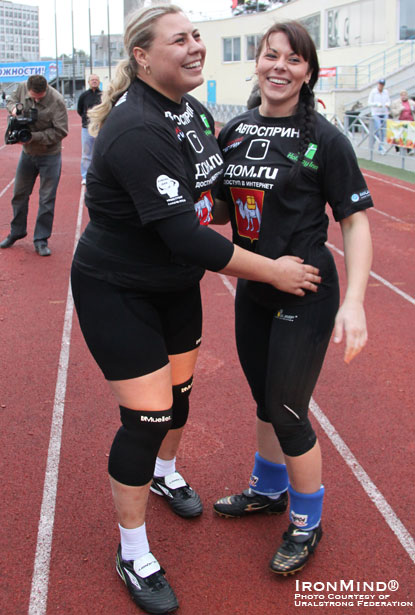 
“There were two events, and the number of victories was in the ratio 1:1,” Klmakov continued.  “Aneta Florczyk expectedly won the farmer's walk, and Marina ‘The Armor’ Kigileva became the first in the mini-bus pull.  It should be noted that the difference in weight in athletes was more than 30 kg in favor ‘The Armor,’ and it helped her win.”

“Florczyk said that she wants to work in parallel in weightlifting,” said Klimakov, who had a chance to interview the woman’s strength world standout for IronMind®.

“Two months ago, she became the second in women's weightlifting Polish Championship and [said she] will be ready for the championship next year, to be the first.  Also Florczyk said that her firm ‘Aneta-Strong’ [is pursuing] solutions for the organization of the World's Strongest Woman contest in 2011.”

Asked about her grip strength, Aneta Florczyk told Sergey Klimakov that she had recently tried the Rolling Thunder® in training and she, “has done more than the current women's world record.”