Goyang, Korea - Dmitry Lapikov (Russia) and Marcin Dolega (Poland) have a history of nipping each other at the line: Lapikov won a gold medal and two silvers at the 2006 World Weightlifting Championships while lifting in the B session. 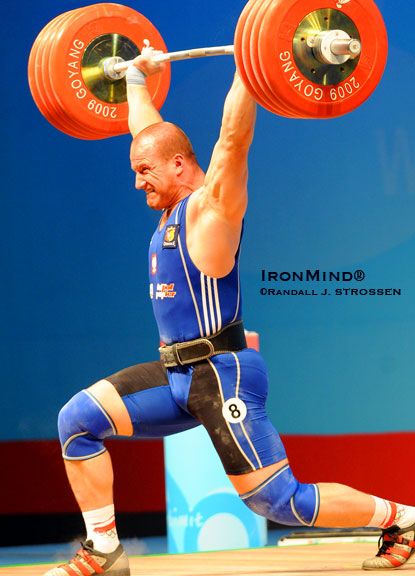 He would have had three golds, but a guy named Marcin Dolega (Poland), after two misses, came through on his final clean and jerk in the A session, to claim top honors in the jerk and in the total.

Things continued at the Beijing Olympics, where Lapikov bumped Dolega for the bronze on bodyweight, and so with Ramunas Vysniauskas (Lithuania) and Andrei Aramu (Belarus) pulling out of the 2009 World Weightlifting Championships at the last minute, the focus once again was on Dolega and Lapikov.

In the snatch, Lapikov stuck 186 kg, Dolega missed 191, Lapikov made it, and then Dolega did likewise, so now it was down to their last attempts.  Lapikov nailed 194 kg for the lead, and Dolega, being heavier, answered with a good lift at 195 kg.  Albert Kuzilov (Georgia) was in for the bronze medal with 187 kg.

Things stayed close in the clean and jerk, where Dolega opened with 221 kg for a good lift and Lapikov responded with a successful 222 kg, to move ahead of his arch rival.  Dolega bounced in the bottom position several times, but just couldn’t stand up with 226 on his second attempt, so the pressure was mounting on him.  A repeat produced a successful lift, so now the heat was back on Lapikov.

Lapikov called for the 227 he needed to move back into first, but as the clock ticked away, there was no sign of the Russian lifter, and then time ran ran out.  He was called again, same weight, for his third attempt, and this time it was clear that he was taking it.  A good clean was followed by a missed jerk, as he couldn’t fix the bar overhead.