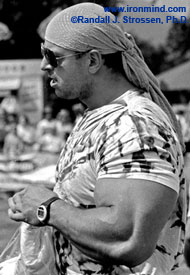 Manfred Hoeberl and his two-foot arms: In 1994, IronMind® sent its ace MILO team over to Scotland to cover the European Muscle Power Championships and the World Muscle Power Championships - it was another IronMind® first and a wave of interest in strongman followed. Dashing, outgoing and a top performer, Manfred Hoeberl immediately impressed us as he won both contests. IronMind® | Randall J. Strossen, Ph.D. photo.

"Unfortunately, since my last motorcycle May 2002 crash, I can't train anymore," Hoeberl told IronMind®. "A car hit me front on while I was waiting for that car to pass since I wanted to turn left into another road. The car hit me at approximately 80 mph so I am kinda lucky to be alive.

"Anyway, when I was in the hospital I dropped to about 100 kg, but now my weight is back up and believe me even with my many accidents I will never look as bad as some guys when full in training." And for anyone who ever saw Manfred Hoeberl in person in his heavy training years, this seems very easy to believe.