Four-time World's Strongest Man winner Magnus Ver Magnusson - one of the most successful, recognized and popular strongmen of all time - reflected on the recent changes IFSA Strongman has brought to the field and said, "I wish I'd had this." 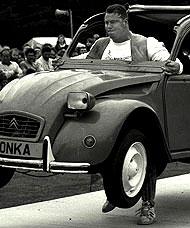 "For the first time," Magnus Ver said, "I can really see a vision. This is just what the sport needed."

To help understand the dramatic shift in strongman over the past decade, it should be understood that winning even the prestigious World Muscle Power title in the mid-1990s might earn a prize of about US$5000 and Magnus said that when he first won the World's Strongest Man contest, in 1991, he got about US$10,000.

Beyond the dramatic upswing in the earning potential of today's strongman competitors, Magnus Ver was quick to point out what he saw as another fundamental shift.

"Now there is a structure," he said, pointing to how the 2005 IFSA Strongman calendar has been organized into a hierarchy of contests culminating in the World Championships.

"If you are good enough, if you are strong enough, there is a way for you to get to the top," said the man who certainly is familiar with the view from that spot.

The 2005 IFSA strongman calendar can be found on the official IFSA web site.