World’s Strongest Man and Dancing With the Stars winner Magnus Samuelsson is a straightforward, modest man, so when he says “100 kg for curls doesn’t feel like a lot to me,” it’s simple fact, not braggadocio. 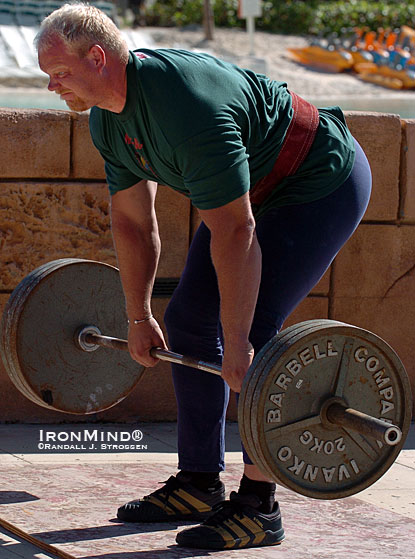 
Samuelsson, who’s also been dubbed the owner of The World’s Strongest Arms, told IronMind® today that after a hectic schedule that left him with little time or energy to train, he’s been getting back in the gym the last few months and progress has been good.

Toward the end of his competitive career as a strongman, back problems plagued the popular Swedish powerhouse.

“First, it bothered me on deadlifts and squats, but then it got worse: if I was walking around and dropped something, I had to stop and think about bending down to pick it up,” Samuelsson explained.

While competing at the top of the professional strongman circuit, Samuelsson had the misfortune of tearing the biceps of both arms—not insignificant injuries because when it comes to Magnus Samuelsson, the biceps are hardly a minor muscle.

“This involves some grip training,” Samuelsson said, who has always used a straight bar for curls so that he can let the bar roll as far down toward his fingertips as possible, before bringing it back into his hand, curling his wrists, and then continuing the movement.

And talking grip, just how strong is Magnus Samuelsson’s grip these days, given that he’s not specializing in it and is coming off a period with little heavy training?

“Can you still just pick up a No. 3 Captains of Crush® Gripper and close it?” IronMind® asked.