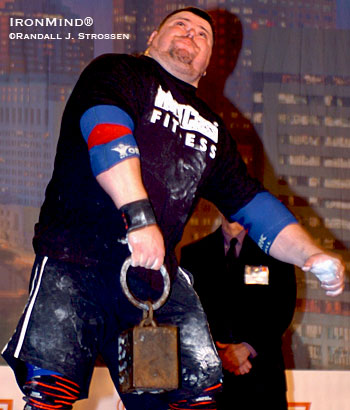 Local guy Brian Siders has more than proven himself in powerlifting and while he's a certain to be a force in the more static strongman events, it might be a mistake to underestimate him on the events that require greater mobility or explosiveness. IronMind® | Randall J. Strossen, Ph.D. photo.


Familiarization with the events and apparatus begins tomorrow, giving the competitors an opportunity to test things firsthand. All the competitors are said to look very strong and fit, with the exception of Mariusz Pudzianowski - who is said to be off the charts.

Still, American strongman fans - and the American competitors themselves - are brimming with confidence that they can bring the title back to the USA, and a particular hurdle Mariusz Pudzianowski faces is having a tough group, along with the squat, in his qualifying heats.

Brian Siders is best known for his outstanding performances in powerlifting, but he has also proven his mettle in the heavy, statically-oriented Arnold strongman contest. In terms of squatting, Siders is a powerhouse, having done 437.5 kg at the 2004 IPF World Championships, for example. This is not an idle comparison because even though the MET-Rx World's Strongest Man squat is done with a barrel-loaded apparatus, the goal is to replicate the depth of an IPF squat. And this year, for the first time, when the seventh and final barrel is loaded, the WSM competitors will be squatting with 800 pounds, a very significant squat and a lift that most would say will challenge Mariusz Pudzianowski.