Edging closer to listing the official events to be used in the Louis Cyr World Strength Challenge, the head of the Fortissimus steering committee, Paul Ohl, gave IronMind® a list of events that will not be included. 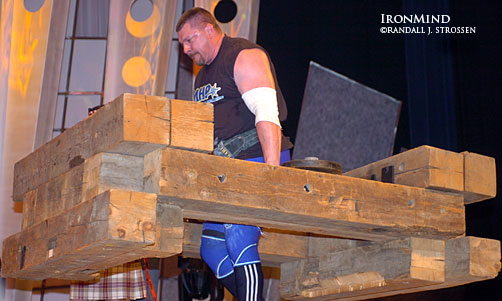 Karl Gillingham on the Timber Walk at the 2005 Arnold strongman contest. This event has become popular at a lot of strongman contests, but don't plan to see it at the Louis Cyr World Strength Challenge next year. IronMind® | Randall J. Strossen, Ph.D. photo.

Given the goal of this contest - honoring the tradition of the great Louis Cyr with a set of events chosen to determine the most powerful man - Paul Ohl told IronMind that the following events will not be included in the Louis Cyr World Strength Challenge.

Looking at the fact that there is no overhead rock lift, for example, do not assume that there will not be a test of overhead lifting, Paul Ohl explained. It's just that it will take another form, and before the exact disciplines are announced, remember that the guiding principles of honoring the tradition of Louis Cyr and identifying the most powerful man are what's driving event selection.