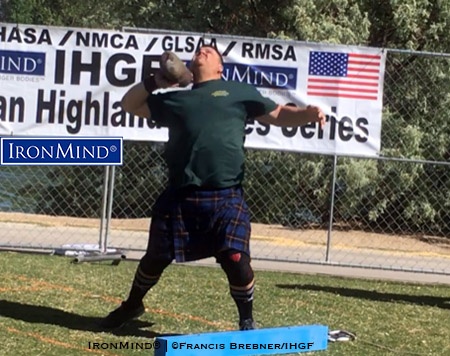 mpressive across the board, Kyle Lille added an exclamation point to his winning performance at the 2018 Las Vegas Highland Games by uncorking an amateur world record in the 22-lb. Braemar stone. IronMind® | Photo courtesy of Francis Brebner/IHGF

Kyle Lillie lit up the Las Vegas Highland Games with a performance that included an amateur world record in the 22-lb. Braemar stone.

The highlight of the competition was a new world record in the 22-lb. Braemar stone set by Lillie, of Phoenix, Arizona. Lillie was unloading bombs in the warmup, and he looked in great shape at 320-lb., ready for action. The world record in this event was 46’ 2” held by Andy Vincent, and Lillie in competition first produced a best of 46’ 1”, just 1” short of the record. On his extra attempts, Lillie adopted the power position and, with a mighty roar, blasted the 22-lb. stone a magical distance of 46’ 10” for the world record. Second place was Burns with 40’ 9”, and third Clinker at 37’ 8-1/2”.

The 56-lb. weight over bar was impressive as Lillie topped out at a world-class height of 17’ 3” for the win. Clinker jumped into second at 15’ and third was a tie between Baltren and Rude.

Athletic director Jacob Darling of the Las Vegas Highland games was happy to see the high number of overall entries—"the many novice and junior athletes taking part for the first time was fantastic,” and he thanked judges Michelle Crownhart and Art Hobson for keeping the games running smoothly.

The next qualifier in the IHGF All-American series is at the Great Plains Renaissance Festival & Wichita Highland Games, in Wichita, Kansas.

Picture of Kyle breaking the world record, picture taken by myself , IHGF picture