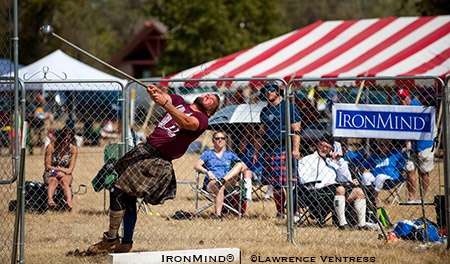 Skylar Arneson went into the final event—the caber—with a 4-1/2 point lead, but it’s never over ’til it’s over.

The exciting championships, in perfect weather, was a battle to the last event, with Lillie edging Arneson by one-half point. Lillie started by setting two field records in the stones. In the 22-lb. Braemar stone, he delivered a best of 42’, surpassing the old field record of 41’ 3”. Second place was a tight huddle between Arneson, Brown and Burns, with Arneson squeaking by at 40’ 5”, followed by Brown at 40’ 3” and Burns at 40’ 2”.

Arneson produced the winning throw of 37’ in the 56-lb. weight for distance. Second was a skirmish between Brown, Hereth and Thompson, with Brown taking second with a noble throw of 36’ 9”, leaving Hereth in third with 36’ 7” and Thompson inches behind at 36’ 4”.

Lillie led the way in the 28-lb. weight for distance with blistering throws over 75’, not to be caught with a best of 79’ 2” for the win. Anthony and Arneson both produced 75’ 1”, with Anthony taking second on countback, leaving Arneson in third.

In the 56-lb. weight over bar, Arneson’s effort soared to a height of 16’ for the win. Second place was decided on countback between Lillie, Brown and Anthony, who all tied at 15’ and took second, third and fourth in that order.

Arneson has a great future ahead of him at such a young age of 24 and will be a star in future Highland games—but he will have to wait until next year for vindication.

Lillie, in only his second season of Highland games, has made a big jump from track and field and is still improving, and like Arneson, will make a worthy pro heavy as he moves up through the ranks.

The IHGF would like to thank Richard Cathey of the Great Plains Renaissance Festival hosting the IHGF All-American Highland Games Championships, and especially the athletic directors Dave and Gunner Glasgow and Larry and Terri Ventress, who made it all possible.