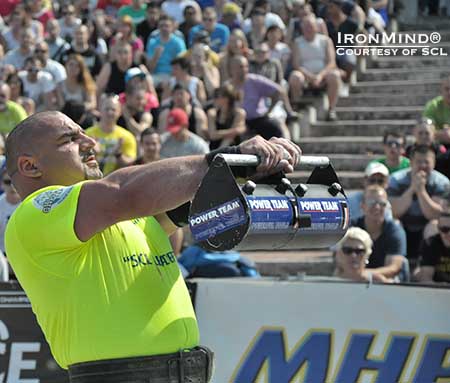 
“He won the SCL Czech in a field of 14 athletes  and conquered again the SCL Leader shirt, whic he will start with in Holland at 22 June.

“Ervin Katona got fourth and lost his leader shirt, but he did a new world record on the Power Team Forward Hold:  He held 30 kg in a time of 72.23 seconds, and he was very pleased with that.

“Ervin could have been in the top three, but the last event (Conan Wheel) hurt his knees too much as he has an old injury there, and that cost him a lot of points.

“Our co-organizer George Patendis from Face-Czech did a great job with this fantastic event and we will be back next year in Czech,” said Mostert.

The next stage of the MHP Strongman Champions League will be in Holland at 22 June, and the first broadcasting of SCL Germany/FIBO will on Eurosport this coming Friday, June 14, at 21.30 (11:30 PM) CET. 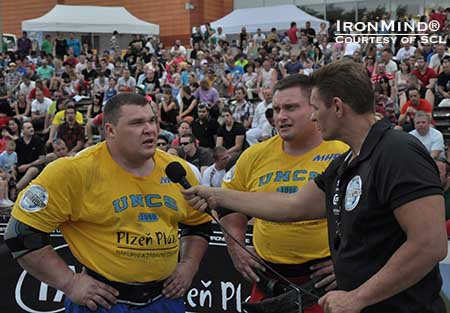 Vytautas Lalas (left) is on a hot streak in strongman, but Krzysztof Radzikowski (center) defeated Lalas and all other comers at the MHP Strongman Champions League contest in Czech this last weekend, taking the title as well as the overall series lead.  IronMind® | Photo courtesy of SCL.