Gunsan, Korea - Kim Sun-bae gave Korea something big to cheer about today, as the 69-kg lifter won his class at the Asian Junior Weightlifting Championships. 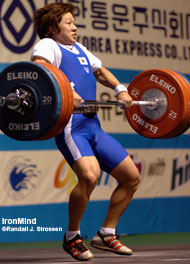 It's the money lift - this 169-kg clean and jerk gave Korea's Kim Sun-bae the gold medal in the 69-kg class, and it gave the host country of the Asian Junior Weightlifting Championships something big to cheer about. IronMind® | Randall J. Strossen, Ph.D. photo.

Pitting the snatcher against the clean and jerker, this class had a lot going for it as China's Huang Chunwang, a dramatic-looking lifter, blistered three good snatches - 135, 138 and 140 - to go into the clean and jerks with a 10-kg lead over Kim. Would you believe that they, too, were tied on bodyweight, so Kim had his work cut out for him if he were to bring joy to his fellow citizens.

Huang provided an opening for Kim, when he missed 162 on his second and 163 on his third attempt - neither time could he stand up with the weight after getting under the bar. Kim had no such trouble, though, as he followed his strong 164 opener with an equally good 169-kg lift on his second attempt, which gave him the gold medal in the total. With one attempt left, we would see why the first two lifts looked easy: Kim called for 180 kg on his third attempt, for what we believe would have been a Korean Junior record. Kim got under the weight, but then he went over backward and laid on the platform just long enough to make some people nervous before he jumped up to enthusiastic cheers.