Paris–Kianoush Rostami (Iran) continued to stamp his mark on the 85-kg category—earlier this year, he won the Junior World Weightlifting Championships and tonight he added the Senior World Championships title to his haul in 2011. 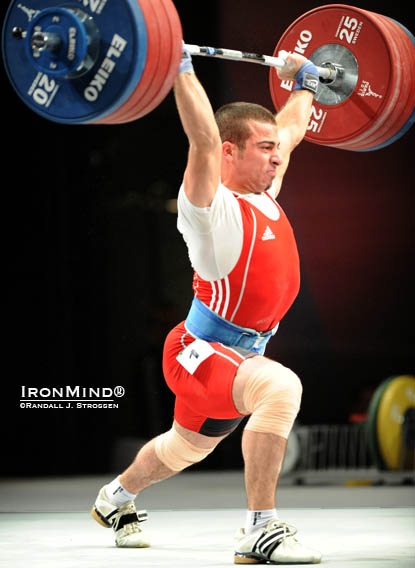 This how close Iran’s Kianoush Rostami came to making a 219-kg clean and jerk on his second attempt.  IronMind® | Randall J. Strossen photo.


Earlier in the day, Andrei Rybakov (Belarus), the Beijing silver medalist and the world record holder in both the snatch and the total, returned to major competition and while lifting in the B-session, he snatched 178 kg, 9 kg behind his world record, but enough for the gold medal in the snatch tonight.

The man who edged Rybakov on body weight in Beijing, Lu Yong (China), was nowhere close to his previous best form as he made his opening snatch, 170 kg, but then missed 175 kg twice.  The defending world champion, Adrian Zielinski (Poland) got the silver medal in the snatch with his 174-kg second attempt success, one kilo ahead of Rostami.

The fans have filled the seats and been vocal supporters of all the lifters from day one of the world championships, but tonight the hall was bursting at the seams to contain the spectators and while the support for everyone was loud and enthusiastic, Benjamin Hennequin (France) threatened to literally bring down the house as the crowd shook the stands when they showed their support for him.  Hennequin was there to prove he was no mere figurehead, as he notched three good snatches, ending on a personal best 170 kg, good for fourth place; and since the clean and jerk is his better lift, the feeling was that something special was unfolding.

Hennequin opened with a solid 203 kg, followed by another success with 208 kg and now the possibility of not just a medal in the clean and jerk, but also in the total seemed possible.  Rostami nailed 209 kg on his opener and then sat back to watch the carnage as miss after miss continued, including Hennequin cleaning 210 kg, but failing on the jerk.

With everyone else finished, Rostami called for 219 kg on his second attempt—if successful, it would give him the Junior and the Senior world records in the jerk, along with the Junior world record in the total.  He cleaned the weight strongly, rammed it overhead, but then dropped the jerk.  He racked the bar on his third attempt, but dumped it as he tried to stand up.

Despite another sea of missed lifts, this was a terrific evening of weightlifting: Benjamin Hennequin walked away with two silver medals (jerk and total), and suddenly there’s a new kid on the block who’s got to be the favorite going into the London Olympics.