"My only goal this year is to return to World's Strongest Man," Karl Gillingham told IronMind®. 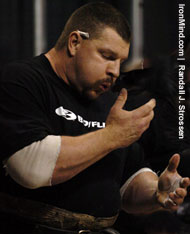 "I want to go back to World's Strongest Man . . . it's the biggest and best contest, it's got the most history . . . If there's one thing the general public knows about the sport, it's World's Strongest Man," Gillingham said, pointing to its ESPN coverage as one example of what puts WSM head and shoulders above anything else.

Gillingham stands out in the field of strongman competitors not just because of his consistently strong performances, but also because he does not fit the stereotype of having a WWE-like persona: Gillingham, whose family has deep and broad roots in the strength world, channels his intensity into his performances, rather than hamming it up. Asked if he thought this worked against him in strongman shows, Gillingham said he didn't think so because, "it takes all kinds of characters to make a movie and there are already plenty of WWE-type guys."

Gillingham hasn't yet qualified for WSM 2006 but if he stays healthy, he should be a contender: The man who won the 2002 Northeast Strongman Showdown - beating Svend Karlsen, Jesse Marunde, Phil Pfister, Jarek Dymek and Steve Kirit in the process - says that he's stronger than ever. "I pulled an 826 deadlift at the Arnold," Gillingham said, a number big enough that it speaks for itself and doesn't need to be propped up with predictable pyrotechnics.