Anyone who's been around IronMind® for the last 15 years or so knows that we often mention John Brookfield's creativity when it comes to training. 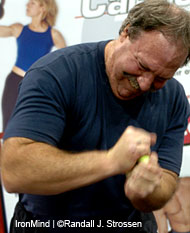 Although we were first introduced to the strength world because of his prodigious lower-arm power - John Brookfield is the second man in the world to close the No. 3 Captains of Crush® Gripper, the first to bend the IronMind® Red Nail™, and is a world record holder in card tearing, etc., etc. - he's also always been a man of great stamina.

In his quest for new ways to develop the ability to sustain explosive power, John Brookfield created a strength and conditioning system that has been used by special forces, federal agents, law enforcement officers, football players and fitness enthusiasts, and his web site for this system is now up and running.

Stop by John Brookfield's power ropes website and see what you've been missing.