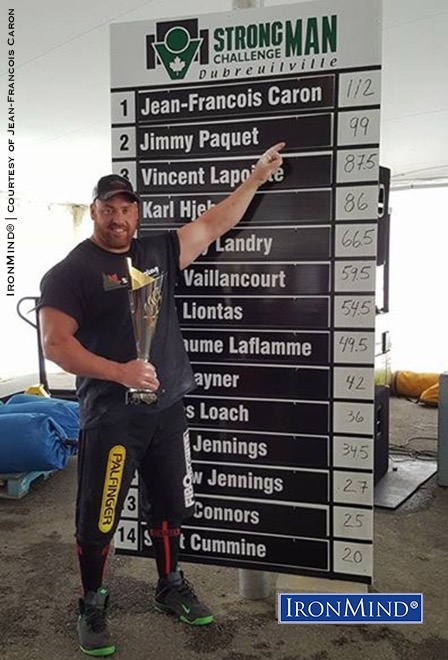 The scoreboard tells the story and Jean-Francois Caron added another solid victory to his collection of Canada’s Strongest Man titles, where he churned out one record after another this past weekend. IronMind® | Photo courtesy of J-F Caron

Canada’s Strongest Man 2016 took place this past weekend in Dubreuilville, Canada, with 14 athletes from all over the country lined up to battle it out over 8 grueling events spread out over 2 days.

The show kicked off very hard with an axle deadlift from 14’’ for maximum weight. Starting weight being 750 lb., and 11 out of the 14 men got the lift. Next weight: 830 lb. and still 8 athletes were able to complete the lift! Next weight would separate the men from the boys, 880 lb. (400 kg) and Caron and Paquet from Quebec got the lift along with the 2 Ontarians, Karl Hjeholt and Paul Vaillancourt! JF Caron once again dominated the deadlift event being the only athlete to get the 925-lb. lift, and he did it with much ease!

Second event: press medley. The medley was composed of 4 implements: first 325-lb. log, then a  190-lb. circus dumbbell ,to finish with a heavy log of 350 lb. and a dumbbell of 205 lbs. Caron won the event, lifting all 4 implements with a time of 45.76 seconds. Paquet was the only other athlete to lift all 4 objects and the men from Quebec dominated the press medley, being top 4!

Next on the program came a very heavy car walk! Half the group failed at completing the full distance of 80’ with the 900-lb. car fram! Lapointe and Caron dominated the race with a 10-second gap between them and their closest competitor; Paul Vaillancourt. The top three were 1) Caron : 18.10 2) Lapointe 18.53, 3) Vaillancourt 29.98.

The Atlas Stones were the last challenge of day 1 for the Canadians. For the first time in the history of strength in Canada the men would have to lift not 5 but 6 stones on platforms ranging from 64’’ to 48’’ for the last big baby of 450 lb! Caron once again showed his dominance as he was the only man of the day and in the history of Canadian strength athletics to lift the 450-lb. rock! The young Quebecer Paquet came in second, loading 5 stones under 30 seconds. And in 3rd came the Ontarian Karl Hjeholt, who loaded 5 stones in 32 seconds with ease; he then lapped the big 450 but was unable to load it! Karl was the only athlete other than Caron to lap the 450-lb. stone!

Day 2 started off with a heavy and uphill truck pull! Only Caron and Paquet completed the entire distance of 70’. Once again, the men from Quebec dominated the event, coming in 1st 2nd and 3rd place! Lapointe pulled the truck only 62’’ before running out of gas!

Day 2 would be a tough day for the legs of the 14 Canadians as the second event was the Squat lift! 750 lb. on the bar and the men would have to do as many reps as possible in 75 seconds! No lift, no lift, no lift… 6 men were crushed by the heavy weight not even completing one rep! James Loach from western Canada made one rep Vaillancourt and Landry managed to get 2 reps. The French Canadians came out on top once again repping the weight for 3 (Lafflame), 3 (Lapointe), 4 (Paquet) and 5 (Caron). Caron looked like he had another 5 reps in him…

Event 3 of day 2: Farmer’s walk and frame carry medley! 340-lb. per hand for 80’ then a frame of 800 lb. for the returning 80’ would test the men’s hands and conditioning. Caron once again won the event being only one of 2 men to complete the course! Landry from Quebec was the other one to finish both implements! Paquet came third, completing the farmer’s walk with ease and taking the 800-lb. frame for 68’.

Final event of the weekend would be the most demanding for the cardio and the 14 Canadian strongmen! The loading race was composed of 2 kegs of 240 lbs. to be carried 50’, then loaded on a 50’’ platform and 3 IronMind sandbags of 275 lb. to be carried for 40’ and loaded on the same 50’’ platform.  Only 5 out of the 14 men still had enough energy to finish the race! Caron won the event in a racing time of 55 seconds followed by Hjeholt (1min) and Paquet (1.06).

To conclude, Caron set a new record as the only Canadian to ever win all 8 events of the competition of Canada’s Strongest Man. He also became the first Canadian to load a 450-lb. stone in a contest. He also lifted 925 lb. on the deadlift, beating the last champion, Hugo Girard, by 115 lb! He also tied the record for the most wins at the competition by getting his 6th victory, and needless to say, Caron will be back next year, going for an unprecedented 7th Canada's Strongest Man title, so there is little wonder that I would call Jean-Francois Caron the most complete and dominant competitor in the history of Canadian strongman!