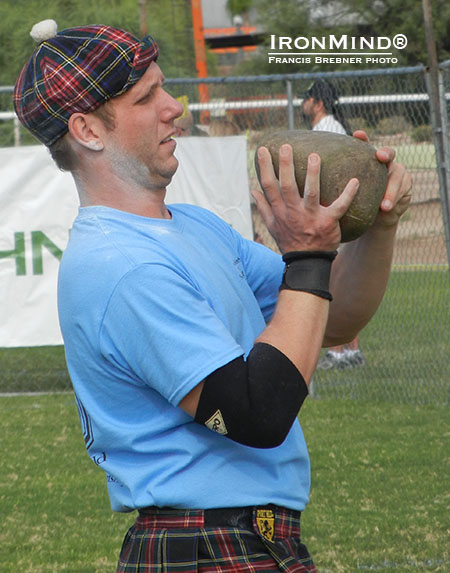 In the heavy weight for distance, Odden came into his own, unleashing a series of world-class throws with a best of 48’ 2” for the win. On extra attempts he upped this mark to 50’ 10”, which is waiting for verification as a new world record.  The current record is 48’ 8”, held by USA’s Isaac Burchett and set in Warrensburg, Missouri in 2006.  Nichol took second place with a best of 46’ 11-1/2”, followed by Thornton at 41’ 7”.

Nichol pulled off yet another win in the 28-lb weight for distance with a top-notch throw of 71’ 3-3/4”, outpacing second-place Odden at 67’ 9” and third-place Howe at 60’ 1/2”. After four events, Nichol was looking very comfortable in the driver’s seat with three wins going into the hammers.
A top hammer thrower in the group was Dawkins, who was in a league of his own, dominating from the first round in the 22-lb. hammer with a bombardment of superb throws and setting a new world record at 98’ 9”. The previous world record was set at 98’ 2-1/2” by Burchett in St. Louis, Missouri in 2005. Nichol took second with 86’ 10” and Middleton third with 84’ 8”.

In the 16-lb. hammer Dawkins cemented his position as the number one world’s lightweight thrower in both hammers. His victorious distance of 126’ 1” obliterated the prior world record of 120’ 1” set by Burchett in Kirksville, Missouri in 2006. In second was Nichol at 115’ 9”, and in third Odden at 106’ 10”. 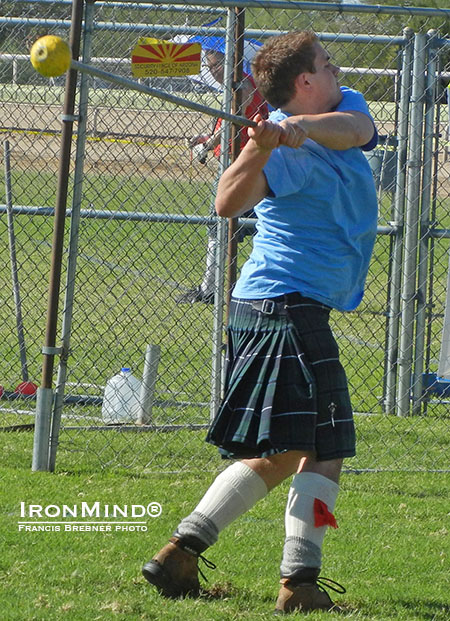 James Dawkins “was in a league of his own” on both hammers. IronMind® | Francis Brebner photo


In the 42-lb. weight over bar, Odden, Thornton and Nichol went at it from the first round and ended in a tie at 16’, but the winner, on countback with fewer misses, was Odden, followed by Thornton in second and Nichol in third.

The championships was a great success and the SAAA and the Tucson Highland Games team did an excellent job of running the athletics over the weekend. Lightweight champion Jacob Nichol noted that the competition was of the highest standard and said, “I am just so happy to have pulled off the title of world champion. I have trained hard for these championships since last year and all the long, hard hours of practicing and training in the gym have paid off.”