His name commands instant attention in the weightlifting world - Ivan Abadjiev is a peerless weightlifting coach, the man who developed the sometimes body-breaking, always record-shattering training system that led the Bulgarian national weightlifting team to so many gold medals that it's no wonder he is feeling very comfortable in the Golden State. 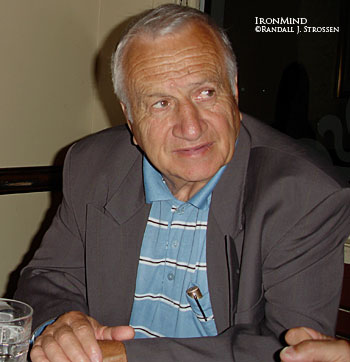 Ivan Abadjiev at a dinner hosted by IronMind® at Paragary's restaurant in Sacramento on Saturday. Chris Krychev, son of Abadjiev's former weightlifter Alex Krychev, had won the silver medal in the shot put at the California High School Championships a couple of hours earlier. IronMind® | Randall J. Strossen, Ph.D. photo.

Ivan Abadjiev is the guest of Alex Krychev, his former lifter whose credits include a 1972 Olympic medal, but he's not here for holiday - Ivan Abadjiev is the cornerstone of an effort to rekindle the fortunes of American weightlifters, once the best in the world but somewhat off the pace in recent years.

Those familiar with Ivan Abadjiev know that he is like no other weightlifting coach in the world and not just because he has produced weightlifters who have cleaned and jerked triple bodyweight - he's a coach who when asked a training question doesn't give a quick formulaic answer in the form of so many sets of so many reps at thus and such percent of the lifter's maximum. Instead, the professorial Abadjiev is likely to draw a diagram of a cell and begin to describe the relevant molecular and metabolic processes that underlie his training ideas. That's the theory, and the practice that follows is a rugged story of heavy, heavy training sessions, typically done two or three times per day.

"Adaptation is my speciality," Abadjiev told IronMind®. "I am probably the best in the world in this subject," explaining what it is that sets him apart from his colleagues and why his advice is sought by athletes and coaches from around the world. This writer can personally attest to a staggering array of leading lifters and coaches from around the planet whom he has seen seek advice from and pay obeisance to the man called the pope of weightlifting.

Alex Krychev arrived in the US as what he calls "a typical immigrant."

"I didn't speak a word of English and had $20 in my pocket," Krychev told IronMind®. Krychev began working as the janitor in a San Francisco area BMW repair shop and ten years later he owned it, and that became the springboard for bigger and better business ventures.

Speaking with passion, knowledge and conviction, Krychev said he is working to establish an elite weightlifting academy in Northern California, "not just for weightlifers," Krychev explained, "but also for throwers, football players and other power athletes." And the coaching brains for this institution? Ivan Abadjiev, no less. Krychev said that there is significant investor interest in this concept already and the blueprint is targeted for completion in one month. Meanwhile, word of Abadjiev's presence here is creating a groundswell of interest among American coaches and weightlifters who are begging to have a chance to learn from the man called the greatest weightlifting coach in the history of the sport.