Create a short list of the favorites for this year’s World’s Strongest Man contest and you’re likely to see three names on it - Mariusz Pudzianowski, Derek Poundstone and Zydrunas Savickas - but considering all the factors, one name seems to rise above the others and that’s Derek Poundstone. 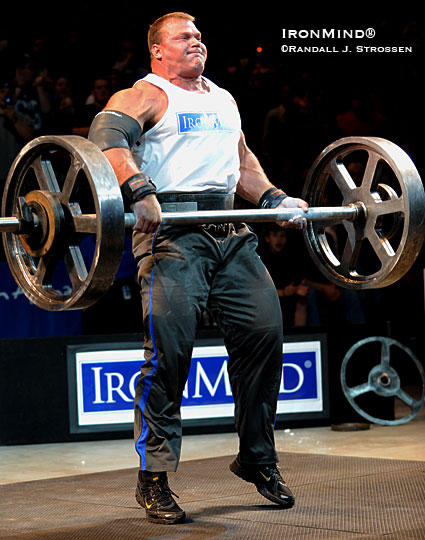 Derek Poundstone on his way to setting a new world record (414 lb.) on the Apollon’s Axle at the Giants Live World’s Strongest Man Qualifier held at the Mohegan Sun earlier this year.  Presenter Colin Bryce called it the highlight of the contest and said that he wished there had been a decibel meter to measure the crowd’s response as they roared for Poundstone when he made this lift.  IronMind® | Randall J. Strossen photo.


The World’s Strongest Cop says he lost World’s Strongest Man last year - as opposed to getting beaten - when he didn’t quite place the final stone on its barrel, allowing Mariusz Pudzianowski to overtake him and win the title for record fifth time.  If you talk to Poundstone, it’s clear that he doesn’t plan to lose again.

Poundstone is steering around 325 pounds of muscle these days and his training is “too good, almost,” he told IronMind® today.

Asked about [the other] favorites for this year’s World’s Strongest Man contest, Poundstone is quick to mention Zydrunas Savickas and Mariusz Pudzianowski, and what follows is a long pause before he can name some other guys whom he sees as having a chance at the top five.

Quick to praise the basic strength of Zydrunas Savickas, Poundstone adds, “I can really challenge him because static strength isn’t everything in strongman.  Every strongman contest has its personality and World’s Strongest Man suits someone like Mariusz or me better than Zydrunas.”

Looking at the big three, Poundstone says he will be surprised if they all show up for World’s Strongest Man this year, not that it might matter so much for Poundstone since he says he’ll be there and he knows he can beat them . . . whoever shows up.