When MILO® went to Scotland in 1994 to cover a couple of big strongman contests, one of the guys we met was Ilkka Kinnunen - who has gone on to become one of the sport’s top promoters, and now after a bit of a break, he’s getting ready to return to powerlifting competition. 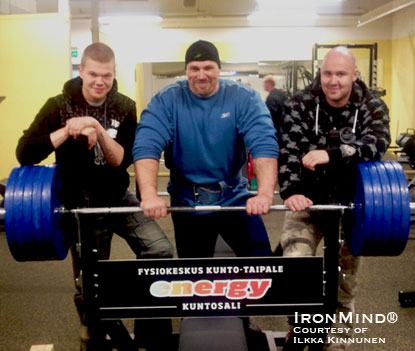 Ilkka Kinnunen - center - is flanked by his training partner Petri Laitenen and gym owner Teemu Karhua after a big bench press workout last week.  A lot of people would consider themselves strong if they could legitimately squat what Kinnunen bench presses raw.  IronMind® | Photo courtesy of Ilkka Kinnunen.


After competing in strongman himself, Ilkka Kinnunen was part of the World’s Strongest Man support team for years, before becoming a principal at IFSA, and most recently, cofounding Strongman Championships League with Marcel Mostert.  Kinnunen has contributed a lot to strongman, including opening up the Chinese market for the sport and launching the 105-kg category in strongman, and his strongman contests in Finland set a new standard for just how heavy things could get.  And now, after a 15-year break from powerlifting, he’s planning to return to competition himself.

“I’m training myself now very hard and planning to go to some powerlifting meets during this year,” Kinnunen told IronMind®.

Even with an arm that is messed up from past injuries, Kinnunen said he is, “Still going pretty strong, benching now 200 kg and my goal is 240 kg raw in June.”  Kinnunen told IronMind® that he can, “Deadlift 320 kg now with just a belt on and [my] goal is 350 kg in June.”

Kinnunen weighs “135 kg at the moment,” and although he says his “squat is bad (I have small piece bone off from my patella, got injured doing security work),” we think that will turn out to be a relative comment.

So now, only one question remains: Is Ilkka Kinnunen the strongest strongman promoter?