If you're tired of trying to figure who lifted what because of what, be sure to catch the IPF deadlift contest at the 2008 Arnold. 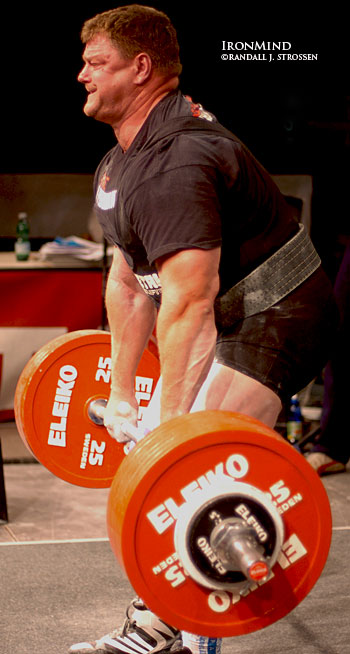 No smoke and mirrors, he's just strong: Brad Gillingham pulled this 390-kg gold medal deadlift at the IPF Open World Championships a couple of weeks ago. Watch for Brad Gillingham and other top powerlifters when the IPF debuts at the Arnold next year. IronMind® | Randall J. Strossen, Ph.D. photo.

Bringing the IPF to the Arnold is seen as a huge addition to an already impressive menu of choices from the top of the strength world, and what a way to kick things off in powerlifting: The deadlift contest will be on the main expo stage on Saturday afternoon, Brad Gillingham told IronMind®, featuring a battle for both the biggest lift, period, and the best lift by body weight formula.

Brad Gillingham will be one of the lifters and he's coming off a huge 390-kg gold medal deadlift at the IFP Open World Championships a couple of weeks ago, so when you correctly note that Brad Gillingham is a master, be sure to remember that word doesn't just mean you're old.