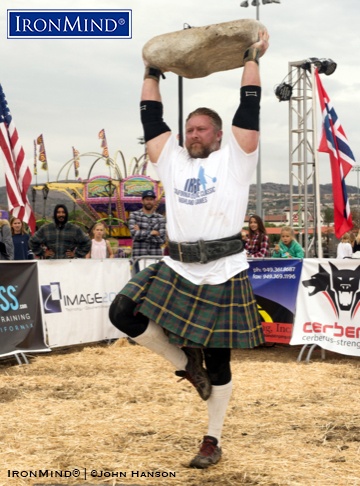 In the Husafell stone carry, athletes could choose a 340-lb. or 400-lb. stone, with the 400-lb. stone a challenge in getting a handle on it. Jeremiah set the mark to beat at 87’, and Congdon produced a lung-busting 176’ 6”. The big surprise came when Eisele, at 6’ 5” and only 245 lb., set an incredible distance of 250’. Garrison, known for his amazing stone carry abilities, could only manage 150’. Later Casey noted, “I did not get the right position on the stone from the start, but I was happy enough with third place.”

The final event, the Atlas Stones, showcased the heaviest series of stones ever used in an IHGF championships event—320, 365, 400 and 450 lb.—with 60 sec. to load as many stones onto barrels as possible. Three athletes managed 3 stones, with Congdon settling for fourth place with 37.09 sec., Jeremiah taking third in 26.76 sec. and Eisele second with 22.51 sec. Garrison put up a world-class performance in placing all 4 stones onto the barrels in 59.58 sec.

One of the best All-American Stones of Strength competitions to date, the athletes were a lot stronger, and the stones were the heaviest and most challenging in a major IHGF competition.

In the overhead stone press, athletes could choose a 120, 140, or 180-lb. stone, with 75 sec. to complete as many reps as possible. Athletes could start with a heavier stone, and if unsuccessful, could move down to a lighter stone. Ingalls went right to the 180-lb. stone, coming close to locking it out in several attempts before moving to the 140-lb. stone to pump out 3 reps, good enough for fourth place. Ayers and Rader tied for second place with 4 reps each, and Rhodes knocked out 6 smooth reps for the win.

In the deadlift, athletes had a choice of lifting one, two or three men seated on a deadlift frame, at 300, 350 and 400 lb. Sharpe took the early lead with an impressive 24 reps, which was surpassed by Ingalls at 27 reps for third. Rhodes squeezed out 29 reps for second, and first place went to Rader, who powerfully pumped out an astounding 35 reps.

Liefia Ingalls and Kristin Rhodes will both represent their country in next year’s IHGF Stones of Strength World Challenge. 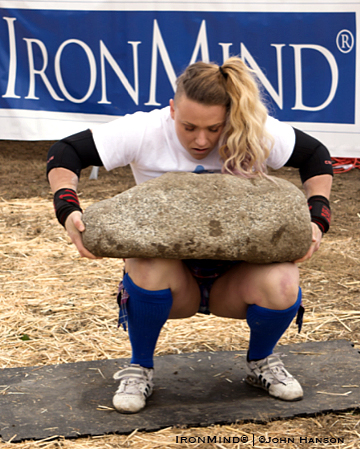 Liefia Ingalls (above) and Kristin Rhodes will represent the USA at the 2019 IHGF Stones of Strength World Challenge. IronMind® | ©John Hanson photo

Dunbar continued in the 56-lb. weight for distance with a fantastic series of throws and a best of 41’ for the win. Brown trailed in second at 31’ 4”.  Gehrke at 28’ and Thomas at 25’ brought up the rear.

In the 56-lb. weight over bar, all eyes were on the Highlander Dunbar, who in the last 6 weeks in this event had broken the amateur world record twice, setting the current record of 18’ 6” at the finals of the IHGF All-American Highland Games Championships in Wichita. Everyone but Thomas cleared the opening height of 14’, and Gehrke exited at 15’. Dunbar and Brown soldiered on through 16’, and at 17’, only Dunbar prevailed, leaving Brown in second place.

Dunbar then asked for the bar to be raised to 19’ for a new world record, but it was no go.  Dunbar will be competing as a pro next year, starting with the Queen Mary Highland Games.

In all, the IHGF competitions in San Clemente were fantastic, and the IHGF would like to thank everyone involved for their help with the event, including Sherri Fontes, Scott Brengel of East West Strength, S10 Fitness, Casey Garrison, and Steve Belanger and sponsors Indie Semiconductor, Lifetime Flooring, and Cerberus for their support. Thanks also to the athletes who traveled from all over the U.S. to compete. The IHGF is planning more major and exciting events for the coming year in California for men and women, including televised coverage.