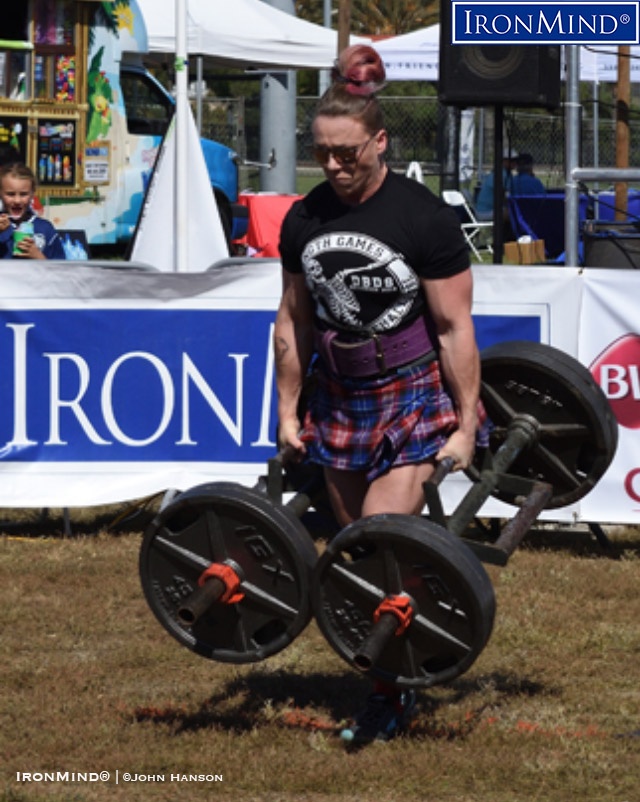 Liefia Ingalls on her way to winning the farmer’s walk as well as the overall title in the Women’s IHGF All-American Strength Games. IronMind® | Photo courtesy of John Hanson/IHGF

Held once again held in sunny San Clemente, California, at the Carnival Colossal, the IHGF World Strength Games were contested over six strength disciplines, with the main prize of an all-expenses paid trip to compete in the IHGF Stones of Strength World Challenge in Fefor, Norway in July 2020. The competitive lineup of athletes included, from the USA, Chris Burke, the 2019 IHGF Stones of Strength World Challenge champion, James Rude, Casey Garrison, Joe Mass, and Dale Holthaus, and Johan Langhorst of the Netherlands and Gabriel Argyelan of Romania.

In the 60-lb. stone putt, Garrison, known for his heavy stone throwing abilities, opened with an incredible putt of 21’ 6” and then upped that mark on his last attempt to 22’ 4” to comfortably secure the win. Rude and Langhorst tied in the first round at 19’ 1”, but on the second and third rounds, Langhorst moved up slightly and then pulled ahead to secure a best of 19’ 9” for second place, leaving Rude in third at 19’ 1”.

With 60 sec. in the Husafell stone to carry a 350-lb. stone over a 50’ course and back, the top two athletes finished with less than a tenth of a second separating them. Garrison took the early lead with a time of 13.88 sec. but was pipped by Langhorst at 13.72 sec. Third-place Burke  did 15.90 sec.

In the overhead stone press (ground to chest, then overhead for reps in 60 sec.), athletes had the choice of a 220-lb. or 260-lb. stone. Athletes could start with the 260-lb. stone, but if they could not press it, they could drop to the lighter stone, and any 1 rep done with the heavier stone beat any number done with the lighter stone. Looking confident, Garrison pumped out 5 reps to tie the IHGF overhead stone press record. Rude, who stands an impressive 6’ 8” and 375-lb., knocked out 4 reps for second place, with Mass on third with 3 reps.

Next, athletes had 60 sec. to throw 4 sandbags weighing 35, 40, 45, and 50 lb. over a 15’ 6’ high bar, a challenging event with only three athletes completing all 4 sandbags. Rude took the early lead in 29.61 sec., followed by Garrison, who quickly set a time of 17.87 to capture the lead—short-lived as Langhorst set off like a rocket and blasted Garrison’s effort, shaving off nearly 4 sec. for the win.

In the car deadlift, athletes had 60 sec. to lift a car and lock out as many reps as possible. Holthaus set the pace with 10 reps, trumped by Rude with 14 reps. Mass and Langhorst knocked out 16 reps to tie the lead. Garrison pumped out 19 reps to move ahead. All eyes were on Burke, who needed 1 more rep than Garrison for the win, and he went all out, eclipsing Garrison in a gut-busting effort with 20 reps.

The Atlas Stones showcased once again the heaviest series of stones used in an IHGF World Strength Games challenge event—300, 350, 400 and 450 lb.—with a 60-sec. time limit to load as many stones onto barrels as possible. Only two athletes managed all 4 stones, with Burke nailing the winning time of 41.57, setting a new IHGF record. Second was Langhorst, just seconds behind with 47.24, and third Garrison with 3 stones in 15.87 sec.

In one of the best IHGF World Strength Games to date, all athletes were in great condition and strong, and the stones were the heaviest and most challenging to be contested. Garrison earned the right to go forward to the 2020 Fefor Power Week in Norway to compete in the IHGF Stones of Strength World Challenge.

This year’s Women’s IHGF All-American Strength Games, one of the most challenging to date, included a lineup of six strength athletes, including Liefia Ingalls, Kristin Rhodes, Kristen Bonitto, Nadia Solis, Hannah Linzay, and Elvira Villasenor, competing in six feats of strength. The winner would secure a place at the 2020 IHGF Stones of Strength World Challenge in Fefor, Norway.

In the overhead stone press, athletes could choose between a 125- or 150-lb. stone with 60 sec. to complete as many reps as possible. Athletes could start with a heavier stone, and if unsuccessful, could move down to a lighter stone. Ingalls was looking strong coming into this event and it showed as she was the only athlete to press the 150-lb. stone—and not once but twice for the win. Solis, who impressed with her speed, pumped out 8 smooth reps with the 125-lb. stone for second, and third-place Hannah Linzay did 5 reps with the 125-lb. stone.

Athletes had 60 sec. in the farmer’s walk to carry 205 lb. in each hand over a combined course of 100’ in the fastest time possible. In a close match with less than 2 sec. separating the top three athletes, Ingalls notched another victory with an excellent time of 20.81 sec., followed by Solis at 22.10, and Rhodes at 22.19.

Ingalls and Linzay will both represent their countries in next year’s 2020 IHGF Stones of Strength World Challenge.

In this challenge, two pro athletes—Colin Dunbar and Eddie Brown—were invited to go head to head in a Highland games challenge.

With a caber weighing 80 lb. and 16’ long, the caber for distance was a highlight of the competition as Brown, with impeccable timing on his first attempt, exploded from the seated power position, and his pull created a nice bounce for a distance of 48’ 7-1/2” to set a new caber for distance world record. Dunbar was second with 42’ 7”.

In the 56-lb. weight over bar, all eyes were on the American Highlander Dunbar, who as an amateur twice broke the world record, which currently stands at 18’ 6”. Dunbar eventually topped out at a 16’ for the win over Brown at 14’.

With the competitions measuring up as the best to date, the IHGF would like to thank everyone involved for their help with these events, including the official judge for the IHGF World Strength Games, Scott Brengel of East West Strength, and his team for setting up the games. The IHGF would like to also thank its sponsors indie Semiconductor, Lifetime Flooring, American Asphalt, Gladiator MATRIX, Best Western Hotel, Depth Before Dishonor Squat Co., and Cerberus Strength for their support. Thanks also to the athletes who traveled from Europe and all over the U.S. to compete.

The IHGF is planning more major and exciting events for 2020 in California for men and women, all of which will include media coverage.