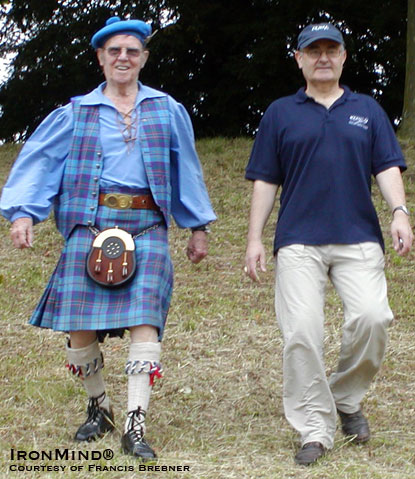 
“This will be held over a series of three of the world’s premier Highland Games, with the best of the world’s top-ranking athletes being invited,” IHGF official Francis Brebner explained.  “The first venue in the series will be held in the incredible setting of the thousand year old Château de Bressuire in France on 13 - 14 June.  This contest will also be the host of the IHGF World Stone Putting Championships," Brebner said.

“The second venue in the series will be the world renowned Pleasanton Highland Games, in the San Francisco Bay Area of California, on 4 - 5 of September.  Pleasanton will also be the host of both the IHGF World Caber Tossing Championships and IHGF World Weight over the Bar Championships,” Brebner told IronMind®.

“The finale of the series will be held in the majestic panoramic mountain setting of the New Hampshire Highland Games at the Loon Mountain Ski Resort in Lincoln, New Hampshire, USA on the 16 - 17 of September.  It will be the finale of the World Highland Games Super Series and will be the host of the  the IHGF World Hammer Throwing Championships and the IHGF World Team Championships,” said Brebner.

Jean-Louis Coppet, president of the IHGF for France and the main organizer for the Bressuire Games, was quoted as saying, “There is a lot of excitement with Bressuire being part of the World Highland Games Super Series and we look forward to having our first international field of athletes taking part [this year].”

David Webster, OBE and Francis Brebner are quick to applaud what is taking place in France, with the development of the Highland Games: “The Bressuire Games have come a long way from their early beginnings with the IHGF European Championships and with their dedication, we are looking to widening and strengthening the sport on this side of the channel.”

Here is the official lineup of athletes for the first leg of the 2010 IHGF World Highland Games Super Series in Bressuire, France.