Amid a string of alphabet-soup designations, confusion levels in the strongman world might amaze even Abbott and Costello, but throughout all the changes, one of the burning questions in the strongman community remains, "How do I qualify for World's Strongest Man?" 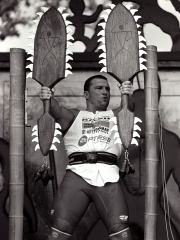 Jarek Dymek has a firm grip on the war clubs at the final contest in the 2002 Super Series (Honolulu, Hawaii). IronMind® | Randall J. Strossen, Ph.D. photo.

World's Strongest Man (WSM) is the granddaddy of all strongman contests: Started in 1977, it has featured the legendary names in the field, and it has routinely been described as "the Worlds" by top strongman competitors. And while the contest is not without its critics, the fact remains that it is the leading brand name in the field and it has provided levels of TV exposure that dwarf everything else to date. Looking forward, "the established relationship" between WSM and ESPN "will continue . . . for the foreseeable future," according to the WSM Super Series press release yesterday.

In recent history, the entry route to World's Strongest Man was through IFSA. At the risk of sounding rummy, this was "old" IFSA, as in Douglas Edmunds, Jamie Reeves, Ilkka Kinnunen and Marcel Mostert - the backbone of the international strongman world for years. Without these four men, strongman would never be at the level it has already achieved, and they were the operational core of WSM - guiding Trans World International (TWI) on everything from athlete selection to event design to equipment preparation, as the WSM show was produced each year. Also vital to understand is that in 2001, old IFSA entered an agreement with World Class Events (WCE), headed by Ulf Bengtsson, to run the Super Series, which had as its mission "awarding the only strongman World Championship title," which was done based on a series of Grand Prix events.

In 2004, old IFSA was transformed into new IFSA, as an investment group purchased the assets of the original organization, bringing both unprecedented levels of funding and management expertise to the table for the express purpose of turning strongman into something much bigger than it currently is.

IFSA Holdings (the new IFSA) has subsequently announced its own world championships, to be held in Quebec, and it has no role in the 2005 WSM contest.

The way to qualify for the 2005 WSM contest is really quite simple:

1) What is now called the WSM Super Series is the vehicle for reaching WSM, and in 2005 there will be four or five Grand Prix events held between April and August, each with a minimum prize list of US$25,000.

2) Placing "first or second in each Grand Prix will automatically qualify" athletes for WSM, which will take place sometime in August, September or October.