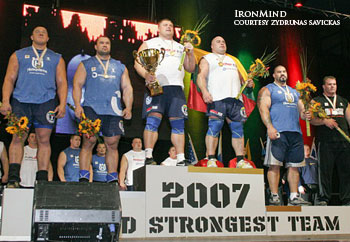 "There was a good crowd on hand to watch the Lithuanian team of Savickas and Blekaitis win the event. Incredibly, the two-man Lithuanian team put up a mark of 9 reps on the 2-man 250-kg log and this was a 'turning point for the team,' said Zydrunas, as it established a big mark for the other teams to follow as well as a statement about the desire of Team Lithuania to win this event on home soil," reported Fennell.