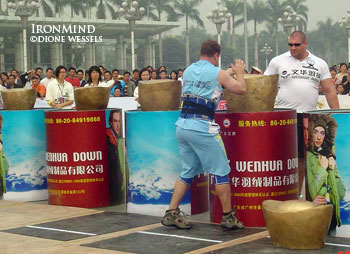 Kevin Nowack (USA) on the Down and Feathers Atlas Stones. IronMind® | Photo courtesy of Dione Wessels.

"Following the stones was the Royal Marina Cup Log lift clean and press for reps (110 kg, 75 seconds). The top three finishers in the Log lift were Sergi Konyushok of Ukraine (9 repetitions), Maris Rozentals of Latvia (8 repetitions), and since there were six athletes that tied for third place with seven repetitions each, they drew names for the trophy cup. The name drawn was Patrik Baboumian of Germany.

"The final event of the day was the pole push. The athletes drew names as to who would be paired together. The top three winners of the pole push were Piotr Piechowiak of Poland, Kesler Nos of Hungary, and Sergi Konyushok of Ukraine.