Dione Wessels, reporting from the IFSA 105-kg World Championships in Panyu City, China, told IronMind®, "The reception from the Chinese people is amazing." 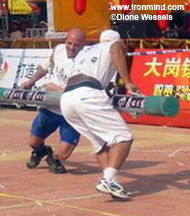 "Last night, we had one event," Wessels said. "There was an opening ceremony for the athletes, with many Chinese culture performances. Last night, there were over 30,000 in attendance, and then again today."