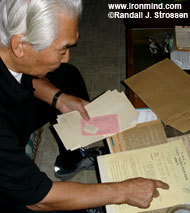 Tommy Kono points out a detail on the flyer for his second contest - held at the Sacramento YMCA in 1948. Two weeks earlier, Kono had launched his weightlifting career at a contest held at the San Jose YMCA. IronMind® | Randall J. Strossen, Ph.D. photo.

We all start somewhere and for weightlifting legend Tommy Kono, back-to-back meets at two area YMCAs is where his Olympic and World Weightlifting Championship career began. And showing that he can look back on his stellar career with a sense of humor, Kono attributed the 25-pound increase in his total from his his first to his second contest as reflecting how quickly he'd mastered the game.

Kono was at his family home in Sacramento yesterday, where he was sorting through piles of newspaper clippings and other memorabilia from a weightlifting career that put his him at the top of his field and caused California Governor Arnold Schwarzenegger to say of himself, "I wanted to be studly like Tommy, so strong and so muscular."