We are fortunate to have Sam Dube's final report on this weekend's Canada's Strongest Man competition, where Hugo Girard won for the sixth time. 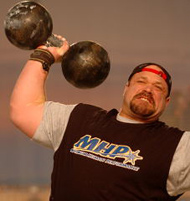 Hugo Girard successfully defended his Canadian championship by performing well enough on the last two events, the Atlas Stones and the Super Medley, to carry him to a convincing victory and sixth consecutive national title.

The former event sustained a change from last year, with the athletes having to deposit the stones in a metal ring set atop each podium, an apparatus first seen at the World Muscle Power Championships earlier this year. The result: only Lyndon and Paulin got the fifth stone, and the five-foot seven-inch Bonneau pressed the 242-pound stone to arm's length three times in his failed attempt to place it on the six-foot podium. The competition concluded with amazing performances in the Super Medley, consisting of a 730-pound Super Yoke, a 260-pound Farmer's Walk, a 550-pound Duck Walk, and a 675-pound Chain Drag, performed for 30 feet each. All in all, a truly world-class event.