IronMind® just received the first official word on the competitors for the World's Strongest Man Super Series Muscle Beach Grand Prix, which is set for June 16 at one of the most famous locations in all of muscledom . . .Venice Beach, in sunny southern California. 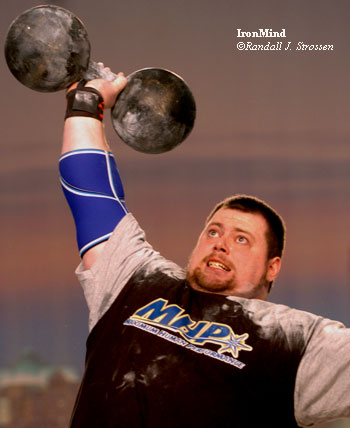 Odd Haugen called Brian Siders "the world's best powerlifter" and when he made his strongman debut at the 2005 Arnold, Brian made quite a splash. Win, lose or draw, you can bet that nobody is going to kick sand in Brian's face at the World's Strongest Man Super Series Muscle Beach Grand Prix. IronMind® | Randall J. Strossen, Ph.D. photo.

Three-time World's Strongest Man winner Mariusz Pudzianowski will be there, so if you want to see him in person, here's your chance. Meet-director Odd Haugen said that Stoyan Todorchev, the top Bulgarian strongman, has been invited, as well as "the world's best powerlifter," Brian Siders. If that's not enough big-name talent, Jesse Marunde is also on the card and Odd said that Jesse "is looking really good and his grip is stronger than ever."

The looking good part is important here, not because of Jesse's stated goal of being the first strongman to make the cover of a bodybuilding magazine (he's already been featured in IRONMAN), but also because of the recent rumor of his demise. The really big comment there, though, is about Jesse's grip, because this is the guy who was the first teenager certified on the No. 3 Captains of Crush® Gripper and when few people thought it could be done, Jesse casually closed a No. 3 Captains of Crush® Gripper in each hand, simultaneously. Odd said that he recently witnessed Jesse pick up the Inch dumbbell with a level of ease that he's never seen before.

The contest starts at noon and there are only 250 tickets for this perfect venue, so watch here for more information on how to get one.