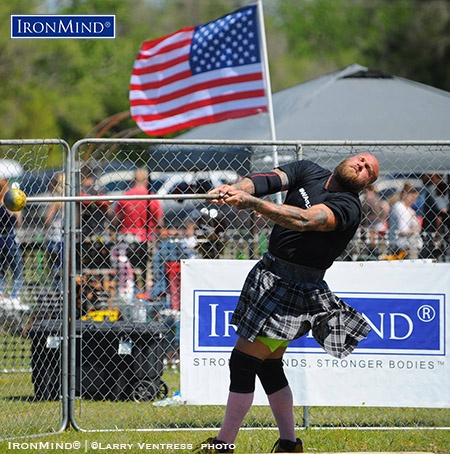 Dan Tennison finished strongly in the lead at the 2016 Wichita Highland Games, which qualified him for the 2016 IHGF All-American Highland Games Championships. IronMind® | Photo courtesy of Larry Ventress

The competition in round two of the IHGF All-American Series was hot and heavy, and when the dust had settled, two more athletes had earned invitations to the 2016 IHGF All-American Highland Games Championships.

The competition got underway with the 22-lb. Braemar stone, and all athletes looked on fire.  Tennison was a favorite, with his background in the shot
put and puts over 57' to his credit. He ruled with an impressive series of throws, his best being 39' 11" for the win and a new field record. Second place was a scrimmage, with Gilmer pulling out 36' 2" to go ahead of Hereth
at 35' 7".

In the 56-lb. heavy weight-for-distance, Tennison upped the ante each round, finishing off with 42' 4" and his third successive field record.  Second place was Gilmer at 35' 9", and third place, Johnson with 32' 5".

In the 28-lb. light weight-for-distance, Becker took an early lead and looked as if he had the victory right up until Tennison's last throw, which surpassed Becker's by well over a meter at a distance of 83' 10" and a fourth field record. Becker took second at 79' 7", with Gilmer in third at 70'.

Tennison dug deep in the 22-lb. heavy hammer and lobbed throws all over 90', with a best of 99' 9" for his fifth win of the competition and yet another
field record. Johnson followed at 93' with Becker third at 91' 3".


In the 56-lb. weight-over-bar Tennison was impressive in action, making it look so easy and winning at 17', his sixth field record of the competition.
He went straight to 18' 1" to attempt the amateur world record and came so close to clearing. Second went to Becker at a height of 16' and third to
Gilmer at 15'.

After two competitions in the IHGF All-American series, Eddie Brown, James Gilmer, Dan Tennison, and Eddie Johnson have qualified for the IHGF
All-American Championships at the McPherson Highland Games in September 2016.

Athletic director Dave Glasgow deemed the games a huge success, noting that this was the most athletes to have competed to date and it was great to see
the young talent coming into the sport and making their way through the amateur ranks.

The next qualifying games in the IHGF All-American series is the Kansas City Scottish Highland Games & Celtic Festival, 11-12 June 2016.