Pleasanton, California - HB III (Harrison Bailey III) had a big day at the U.S. Invitational Heavy Events Championships - winning three of the four events today and emerging as the leader after the first day of competition at this major Highland Games competition. 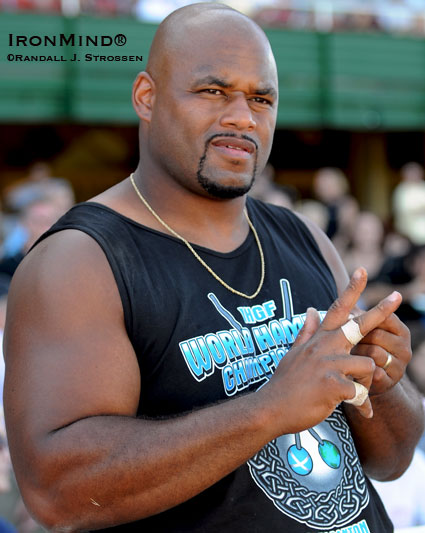 Harrison Bailey III is in the driver’s seat at Pleasanton, where he told IronMind® that if he can remember his hammers tomorrow, things will be looking good.  IronMind® | Randall J. Strossen photo.


Here are the cumulative points after day 1:

Bert Sorin won the 16-lb. hammer, and from there it was Harrison Bailey III’s day as he swept through the remaining three events, starting with the 56-lb. weight for distance - where he won with a throw of 45’ 5-1/2”.  He was first equal with Eric Frasure on the 56-lb. weight for height (both making 18’)  and then added a victory on the caber to his haul for the day.

Harrison Bailey III was tipped as an early favorite for the podium, and 2008 Highland Games world champion Sean Betz told IronMind® earlier in the day that he saw HB III as the man with whom he would most likely be locking horns in the quest for top honors here at Pleasanton - citing HB III’s consistency.

HB III had quite a day and Sean Betz’s crystal ball is looking pretty good, too.