Scott Rider faced a strong field at the Halkirk Highland Games and when he beat them all, one can’t help but wonder if there might not be another Highland Games World Championships title his future. 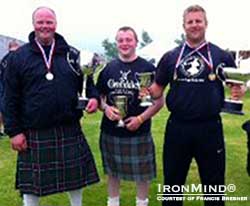 A sunny day with strong head winds greeted over 4000 spectators, who packed the Games field, which was opened by the chieftain of the games, Viscount John Thurso, MP of Ulbster.  Judging the heavy events were renowned heavy Alistair Gunn and Leslie Oliphant.

The two events with the light and heavy hammers were contested for the title of the Scottish Championships.  First up was the 16-lb. light hammer and after three all-out rounds, the win went to Rider with a throw of 127’ 7”, followed by Sinclair at 123’ 1”, with Lolkema pulling off a third place finish of 121’.

In the 22-lb. heavy hammer, noted thrower Sinclair unleashed a series of top-notch efforts, with his best being a whopping 112’, which more than secured him the win and the title of Scottish Hammer Champion.  Rider took second with 107’ 4” and L. Wenta third with 101’ 10”.