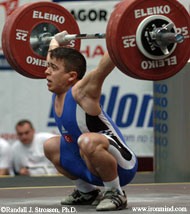 Halil Mutlu is under provisional suspension, the IWF said, which means that he currently cannot compete and his results are removed from this year's European Weightlifting Championships. However, because Mutlu has requested a hearing, until it is completed, his suspension is provisional, which means that if he is subsequently found innocent, his results from the 2005 European Championships will be reinstated.

Halil Mutlu is a three-time Olympic champion in weightlifting and he has issued repeated public statements saying that he did not knowingly ingest a banned substance.

While some critics have tried to use positive test results in weightlifting as a way to bludgeon the sport, such prominent leaders in the international athletic community as Dr. Jacques Rogge, President of the IOC, have praised the efforts of weightlifting to eradicate doping from its ranks.