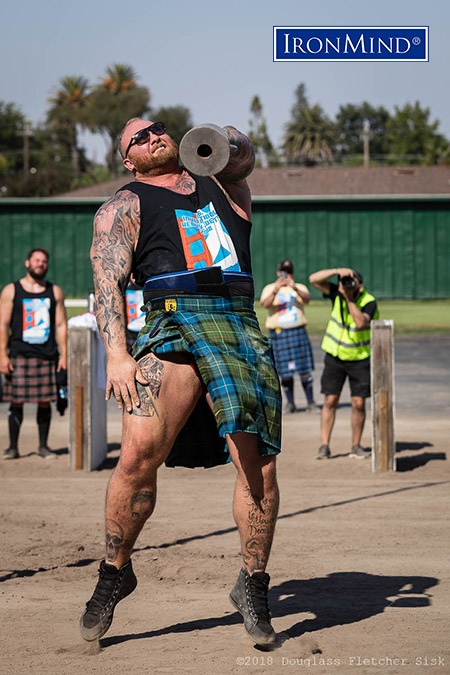 Hafthor Julius Bjornsson might also be known as Mountain and World’s Strongest Man, and he’s got quite a grip on the 56-lb. weight-over-bar world record. IronMind® | Photo by Douglass Fletcher Sisk

What better place than the Caledonian Club of San Francisco Highland Games (Pleasanton) for Hafthor (aka Mountain aka World’s Strongest Man) Bjornsson to break his own world record on the 56-lb. weight for height?

Hafthor Bjornsson “The Mountain” of Game of Thrones has set a new world record in the weight over the bar event. As a special event at this year’s Caledonian Club of San Francisco’s 153rd Scottish Gathering and Games; Hafthor Bjornsson, the World’s Strongest Man, broke his own world record by tossing a 56lbs. weight one handed, over a bar that had been set at 20’1”.
Thor was in incredible shape at 6’ 9” and 420 lbs., he took a few warmup throws with the professional Highland games athletes that were competing in the U.S. Invitational Weight over the Bar Championships and then after the conclusion of that event he asked to have the bar set at 20’1”, an incredible height to throw a 56lbs. block of steel over. The grandstands were packed with thousands of very excited people. Thor’s first attempt went flying past the bar but not over it, it’s very difficult to control the weight and have it roll over the bar, he had 2 attempts left to break the record. The tension began to mount as he gathered himself and stepped back under the bar, he indicated to the crowd that he‘d like their support and they responded with loud cheers of encouragement. Then with a mighty release of power he sent the weight shooting over the bar, the crowd erupted with a roar, a new world record had been set!