Hafþór Júlíus Björnsson had an easy time of the Strongest Man in Iceland as he won “seven of seven events,” Magnus Ver Magnusson told IronMind today. 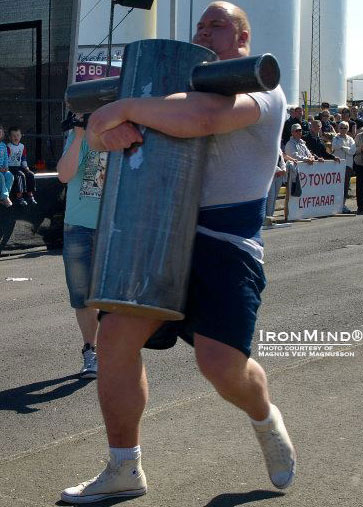 
A couple of weeks ago, four-time World’s Strongest Man winner Magnus Ver Magnusson had told IronMind that “The giant cross carry is a new event that will be in ‘The Strongest Man in Iceland" and while thinking Isn’t it a little early for Easter?, this reporter quipped, Is the Vatican a sponsor?

As it turned out, while the new implement is cross shaped, it is as secular as can be: it’s a mooring bitt, used to tie up an large ship when it docks.  Mooring bitt?  Maybe someone can come up with a catchy name for this.  Magnus Ver Magnusson . . . 4-time World’s Strongest Man winner . . . mooring bit.

“Runner up was Ari Gunnarsson [and] third was Páll Logason,” Magnus Ver said.

Asked Where’s Benedikt [Magnusson] and how about Stefan (Solvi Petursson)?, Magnus Ver said, “Benedikt is still recovering with biceps and Stefan is in Scotland,” so vanquish any ideas that with Hafthor’s name on the starting list, everyone else figured they would be fighting for first behind the (really) big guy.