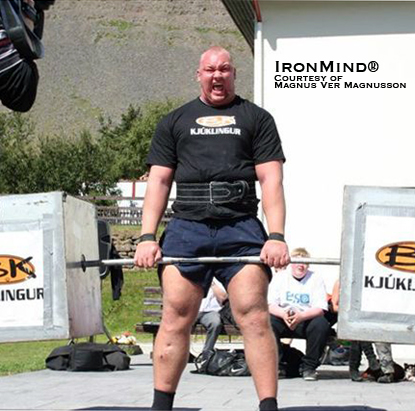 Featuring “8 events in different places on the West coast of Iceland, this was the 19th time this competition was held,” said Magnus Ver Magnusson.

“Stefan Solvi Petursson had a small injury from Norway [Viking Power Challenge], so he could not defend his title,” Magnus Ver said, although given the performance of Hafþór Júlíus Björnsson, that might not have been an easy task as Björnsson “had no weak events.”  Páll Logason was second and Ari Gunnarsson was third.

Four-time World's Strongest Man winner Magnus Ver Magnusson has a knack for discovering strongman talent, and commenting on the continued development of his latest find, Magnus Ver said that “one month ago (at the 2010 Strongest Man in Iceland contest), Hafþór Júlíus Björnsson did one rep on the circus dumbbell and now he did 5 reps.

“Consider this,” Magnus Ver told IronMind®: “The kid is only 21 years old and he is up to 175 kg and is 2.05 meters tall.  He’s picking up fast—I have never seen anybody learn this fast.”