Chalk up another big one for New York Arm Wrestling. 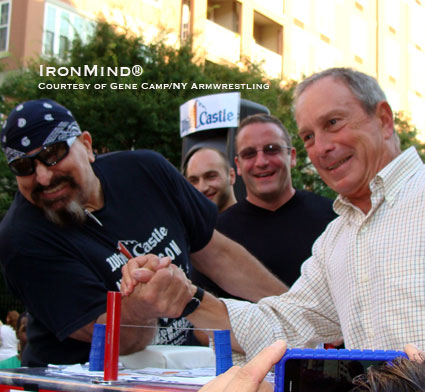 Giorgi Gelashvili won the men’s overall Captains of Crush® Grippers Brooklyn Strongest Arm award, the Arm Star award and the title in two weight classes, but it was New York Arm Wrestling founder and president Gene Camp who had the honor of getting beaten at the table by distinguished guest New York Mayor Michael Bloomberg.

Gene Camp told IronMind®, “One of our best events of the year.  Drew a great captive audience and Mayor Bloomberg. This is the first time that the winners of the Captain's of Crush® Brooklyn's Strongest Arm awards actually came from Brooklyn. Congrats to [men’s winner] Giorgi Gelashvili and [women’s winner] Joyce Boone.”