“Three new men qualify for the WSM finals after a dust up in Poland”—that’s the bottom line from Giants Live–Poland, reported Colin Bryce who runs the official World’s Strongest Man qualifying tour. 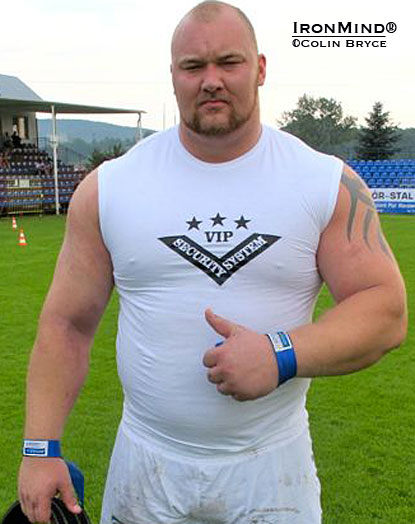 Aided by having 4-time World’s Strongest Man winner Magnus Ver Magnusson as his mentor, Icelandic strongman Hafthor Julius Bjornsson has risen meteorically, and now the giant from the Land of Fire and Ice is on his way to the 2011 MET-Rx World’s Strongest Man contest, having picked up a wild card invitation following his performance at Giants Live–Poland.  IronMind® | Photo courtesy of Colin Bryce.

The third grand prix of the Giants Live season got under way in glorious sunshine in a stadium just outside Krynica Zdró in Poland on Saturday.  The line up may have had quite a few "novice" WSM athletes but with a few seasoned strength super stars like Terry Hollands looking to get a "sharpner" before Worlds we would get a good gauge of who is in top form.  As ever, the top three from this contest qualify for the WSM Finals so it was a pressure cooker atmosphere before the whistle for the first event - arm over arm with a 7 tonne truck.

Perhaps the biggest question for strength pundits was would Krzystof Radzikowski finally step out of the shadow of his old training partner Mariusz Pudzianowski and get the long deserved invite to Worlds?  This was a question he soon answered in dominating fashion.  Radzikowski, known for his legendary shoulder power, may have only had two victories out of 6 disciplines but he never dropped out of the top three across the other events. He was the champion on the day - also on the podium were the two men with the big reputations from the Arnolds—Mike Jenkins of the USA in second and Mateusz Baron of Poland came in third.

The first event, the arm over arm, was won by Tomak Kawal who being the local hero had a dream start.  It was perhaps a little too light for this field as the real giants like Hollands and the new Icelander Thor Bjornsson at 6 foot 6 and 6 foot 9 respectively were beaten by the 6-foot Pole in a time of 15 seconds for 20 m.  Once the truck got over the initial inertia it was all about reeling the rope in with quick arm power. Importantly, Mike Jenkins of the USA was 9th.  A terrible start for the man from Hershey, Pennsylvania.

Next up was meant to be a Medley of Tyre and Super Yoke.  However, halfway through the event the heavens opened.  Lightning exploded all around, and finally the heavens opened to a torrential downpour.  After a half hour wait it was decided to restart the event without the tyre.  The grass surface and the constant drizzle meant it was too dangerous to continue tyre.  In the end, it was a quick foot race over 20 m with a fairly light yoke.  Mike Jenkins took the 380-kg yoke the distance in under ten seconds.  It was a physique and power very reminiscent of Vasyl Vyrastyuk (WSM winner of 2004). Hollands was second and Baron was third.  Both men a second or so behind Jenkins.

Then in the log press, Radzikowski shared the win with Jenkins—9 reps in 60 seconds on 150-kg log.

Shield carry up next, and Jenkins' comeback was looking good.  He took the 190-kg lump of steel for 75 m.

Then to the Atlas stones and it was a monster time from the 22 year old Icelander Hafthor Julius “Thor” Bjornsson of 6 stones in 28 seconds onto high platforms that looked impossible to beat; but such is the quality of Radzikowski, at 6 foot 2 inches he is very similar to Maruisz's shape but is even taller.  It helped him to a time of 26 seconds for the win.

The final event was the deadlift.  A brutal (narrow) sider handle Deadlift at 370 kg.  The outstanding moment here was when Baron, who sat in 6th place, went wild and hit 15 reps.  Six more than anyone else in the event.  He collapsed to the ground in exhaustion afterwards.  It mean Hollands, who was perhaps holding back a bit for WSM, dropped from third to 5th = in the last event and Baron jumped all the way to the bronze medal position—and more importantly he gained a golden ticket to Worlds.