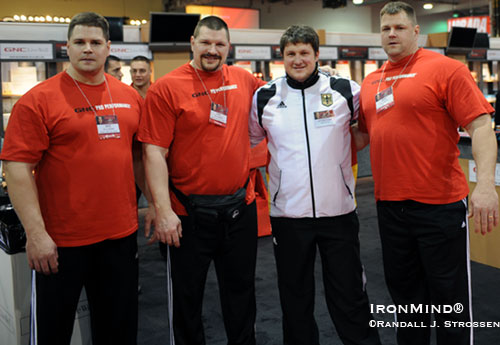 
“[Before heading off to the World Games,] Brad had his last big workout Friday,” Wade said,  “so I was filling in for him this weekend.”

“This is part of GNC's promotional efforts to support our nation’s armed services.  The events include autograph signing, free samples, and drawings or competitions to win prize packages.  Today I was at Warren Air Force Base in Cheyenne, Wyoming, for a grand reopening of the GNC.  We ran a grip challenge using IronMind® Captains of Crush® Grippers with the individual that closed the hardest gripper for the most reps winning a GNC backpack loaded with product.  Our top effort was one rep with the 1.5.”

When Wade told us that “Karl was also traveling today at another military base,” IronMind® checked in with him, too.

“The military stores are a top priority for GNC,” said Karl.  “Each year, Brad, Wade, and I do multiple appearances at military branches across the country to promote GNC, support the troops and to answer training and supplementation questions.  It is a great program especially in times of conflict like we have now.  Today I was at Fort Rucker in Alabama.  They had their base powerlifting championship and I went over to show support for the contest and to do a grand reopening of the GNC on base.  I met and talked to several helicopter pilots wuo that are heading for the front lines.  I thanked them for their courage and call of duty to our country.  Military personal are ultimately top athletes and anything I can do to help their performance and spirit is good for our freedom fighters.”