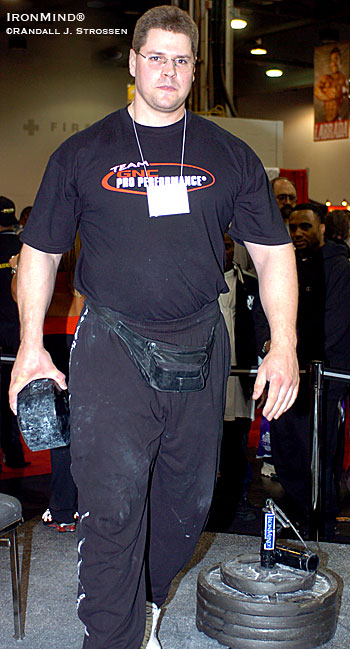 Wade Gillingham takes the Blob for a walk - the ease with which Wade does this belies the difficulty of this grip-strength challenge.  IronMind® | Randall J. Strossen photo.


“The Grip Gauntlet will be run at three major fitness expos in 2010: the FitExpo, the Arnold Classic, and the Mr. Olympia,” said Gillingham.

“The GNC Grip Gauntlet has been run at 18 shows since 2004 and continues to challenge the strongest grips in the world,” said Gillingham.  “Since 2004 only 8 men have completed the heaviest version of the challenge: #3 CoC gripper, 207-pound Rolling Thunder (212 prior to the new handle in 2009), Blob."

Even if this sounds like a pretty exclusive club, Gillingham thinks that's no reason to coast: "The list has grown too big for my liking and has got me thinking that one of these years we may have to up the challenge!”

By world standards, the amount of weight used for the Rolling Thunder is quite modest, so at least one person has suggested ramping up that component of the challenge.

“It took 4 years for anyone to challenge what Monte and I did in 2004,” said Gillingham.  "In 2008, along comes a mountain of a man - Tex Henderson - who ripped through the challenge and even closed a No. 3.5 Captains of Crush Gripper to put some icing on the cake.

“It's fun to see the progression of grip strength over the years and I take pride in knowing that that GNC and IronMind had a lot to do with it.  People train for the Grip Gauntlet now and although I shake hands with several thousand competitors a year, names and faces are starting to get more and more familiar.  People keep coming back after a year of training - some say it's for a free t-shirt but don't kid yourself, they want to prove themselves. Everyone leaves with a smile on their face and renewed interest and promise to improve for ‘next year.’”