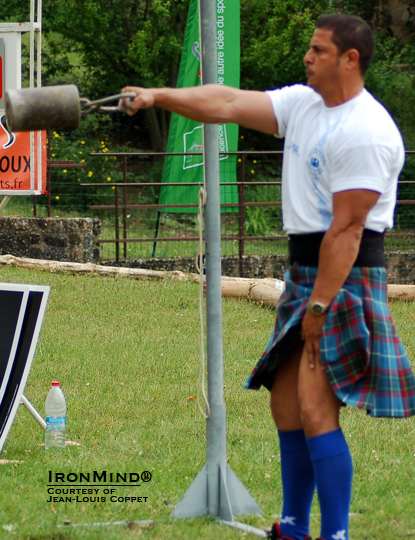 A total of eight throwers of the AJEF Club in Bressuire France are eagerly in training to get as fit as possible for their first full season of Highland games competitions planned.

The team led by captain Belkacem Smahi and Amine Amroun, who won the French Highland Games Championshis of 2010, enthusiastically gather every Saturday the team spends a total of three hours together, improving their throwing techniques and strength under the guidance of Martine Brunerie and Jean-Claude Bordonnat.

Jean-Louis Coppet, the AJEF chairman and founder of the Bressuire Games in France, attends nearly all the training sessions, and likes to bring the latest news from the international Highland Games world on what championships are planned for the future as well as up-to-date news regarding the French athletes’ Highland Games schedule for 2011.

The French team, led by Amine, will compete in Belgium, at the Zelgate Games on April 17th.  Other French throwers on the team will be Belkacem Smahi and Eric Alagille, from the AJEF and ASL Luzarches clubs, respectively.  It was with great pleasure Amine and the whole team here greeted the news that the IHGF had selected him for the European Championship in Hungary and for the World Championships in Spokane, Washington, USA.

Amine, himself a former French champion in bodybuilding, was introduced to throwing only a few short years ago and has improved his throwing considerably from season to season, like the many other throwers of the AJEF Club in Bressuire also.

The team spends a considerable amount of time in the gym working on building the strength needed for the sport, and all look forward to a second midweek training schedule where all five major events of the competition are worked on.

The French AJEF team will also compete this year in Germany, Scotland, and the Netherlands.

Jean-Louis Coppet and his fantastic committee are already busy planning for the French championship to be held in Bressuire on August 27th.

The championship is organized jointly with a gathering of disabled and handicapped youths from Scotland, Norway, Ireland and France who will participate in games such as boccia or curling on wheels.

The whole weekend is to celebrate the twentieth anniversary of the twin town link between Bressuire, France and Fraserburgh, Scotland.

In a near future we’ll welcome Scott Rider to Bressuire, where he will lead a training clinic over the weekend 26 - 27 March.

So far so good with the progress of traditional Highland Games in France with even greater events to be announced in the very near future.