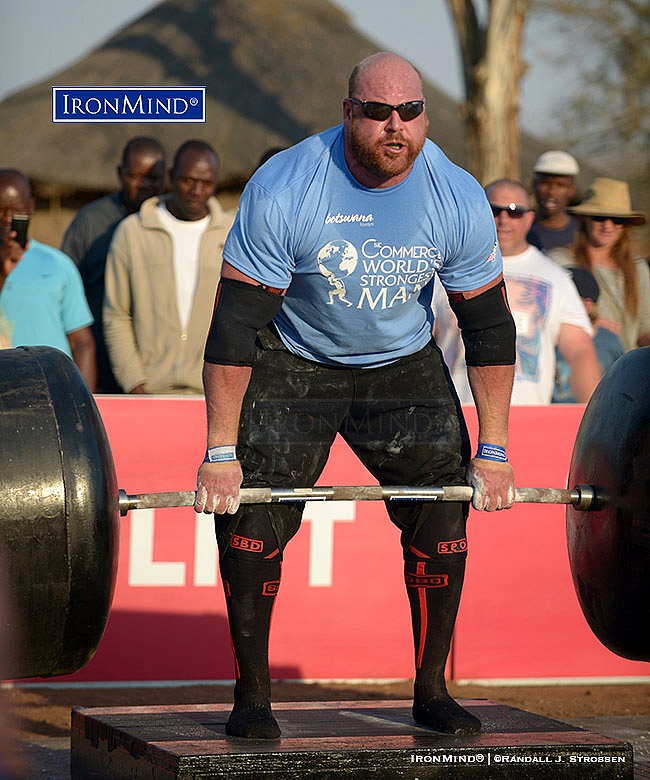 The deadlift—universally considered a primary test of strength—shows Jean-François Caron for the giant slayer that he is, often competing against men who outweigh him by something like 100 lb. (45 kg). At the 2016 World’s Strongest Man contest (Kasane, Botswana), Caron pulled 435 kg for a Canadian record and third place behind Eddie Hall and Brian Shaw (tied at 445 kg). IronMind® | ©Randall J. Strossen phot

Fortissimus World Strength told IronMind today that based on its ranking system, “Jean-François Caron, Canada’s Strongman legend, is the top international Strongman for the 2015-2019 period.”

“The 9-time Canada’s Strongest Man (2011-2019) was on the starting list of 34 international competitions out of 108, with 8 wins and 22 top 5 places.
“With 5 top 5 finishes at the World’s Strongest Man contests (2015-2019) and a best ever 4th place in 2019 at age 37 (coming back from injury), Jean-François Caron was the 2018 Arnold Pro Strongman World Series overall champion and one of a selected few to compete in all pro circuits (WSM, Arnold Strongman Classic, Arnold Pro Strongman World Series, Strongman Champions League, Giants Live and World Ultimate Strongman-Dubai) since 2015.

“In 2017, the all-time Canadian record holder of 91 Strongman competitions ended the year as runner-up of the Strongman Champions League overall title. That same year, Caron was named the Fortissimus Strongman of the Year.

“In 2018, Caron became the first-ever Canadian strength athlete to make the top 5 at the Arnold Strongman Classic World Championship.

“Competing only 16 times during the 5-year span, with one WSM and two Arnold Strongman classic wins, is Iceland’s Hafthor Julius Bjornsson. The giant edged out another giant, USA’s greatest strongman ever, Brian Shaw (14 competitions), by ½ point.

“In 4th place, comes Slovenia’s great, Matjaz Belsak, with a record 39 competitions under his belt, 23 of these coming with the Strongman Champions League.

“Latvia’s strongest man and twice Strongman Champions League overall champion (2016 and 2018), Dainis Zageris, clutched the 5th spot of the five-year ranking. Zageris produced a record 35 competitions with the SCL  a major organization that promoted 67 international strongman contests between 2015 and 2019.

“With as many Strongman events held the world over, strength athletes deserve an official recognition of their track records. This is also a must for the future of a sport whom many still look at as circus exhibitions. History will prove them wrong,” said Paul Ohl, President and Founder of Fortissimus World Strength. 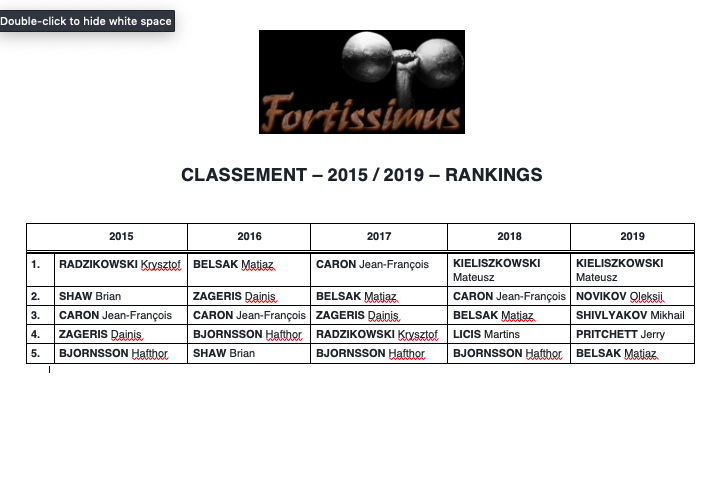 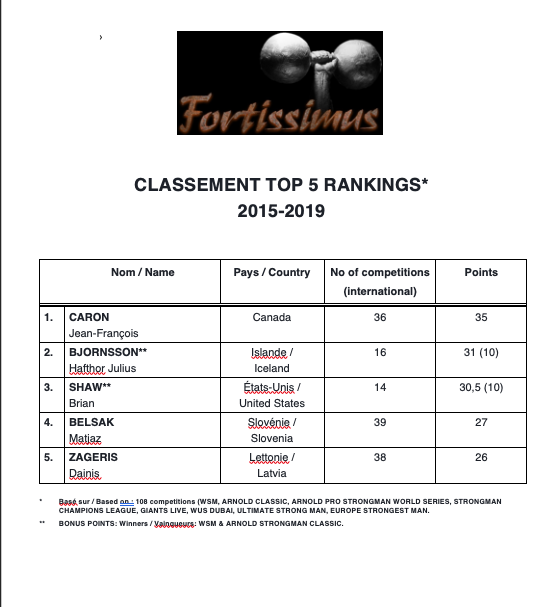