Bigger, heavier and more potent in every way, Fortissimus 2009 built on its base and improved - delivering a strongman contest that has no peer. 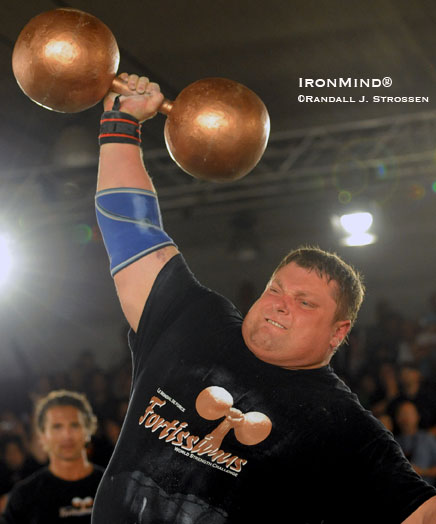 With its overall goal of testing the strength of the world’s top professional strongmen, Fortissimus might seem to have much in common with other strongman contests, but what separates Fortissimus is its 10-event structure, heavy weights, ties to history and community support.  Here, passion rules the day and while dreams are nice, at Fortissimus, the dreams become reality.

The infrastructure of the contest evolved since last year, as new implements were developed, top international referees Marcel Mostert and Ilkka Kinnunen were added, a larger venue housed the event and prize money increased substantially.  In addition, a certification board was formed to oversee event and equipment standards, and Dione Wessels managed the all-important scorekeeping operation.  What remained unchanged was the commitment to the contest itself, its competitors and the traditions from which all of this sprang, so the net effect is that what had already been very good just got even better.

Coming into this year’s contest, strongman fans eagerly anticipated a rematch between 2008 winner Derek Poundstone and 2008 runner-up Zydrunas Savickas.  With so much being said about how this battle would shape up, it could easily have fizzled, but it didn’t, as one man’s advantage waxed and then waned, with their relative positions changing throughout the contest.

In the end, though, Zydrunas Savickas was the man who stood at the top of the heap - not just winning Fortissimus but also the IronMind® Overhead World Challenge and the Sigmarsson overall total poundage award as well.  Derek Poundstone showed once again that the word quit does not exist in his vocabulary.  Brian Shaw did himself proud, finishing third overall and winning the Slater King of Stones World Challenge, with such contest highlights as being the only man to load all the Atlas stones.

Here are the final results: