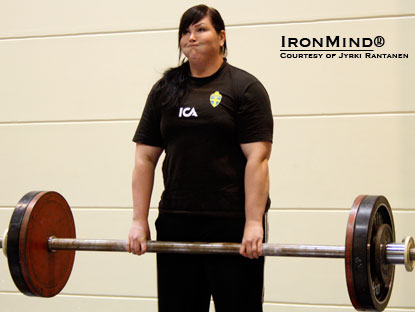 The competition was organized by Tomi Kujala/Merikarvian voimailijat, and Jyrki Rantanen was the head referee. The competition had 3 events: Captains of Crush® (CoC) grippers as a raising bar from Trainer to No. 4, Rolling Thunder (RT) and Apollon´s Axle (AA).

Every lifter had 3 attempts to go (plus extra ones for national records, but those were not calculated to overall results) and there were points from each event to calculate, not total kgs.  The ladies took the main role in this record breaking competition.  During the past years, there has been one over the others in ladies grip contest; Jaana Tanner, who´s latest victory was at the IronMind Grip Classic–Volume 1 a few months ago.  Today the new generation with Annina Saine and Yvonne Häkkinen spoiled Jaana´s dreams about continuing as unbeatable. 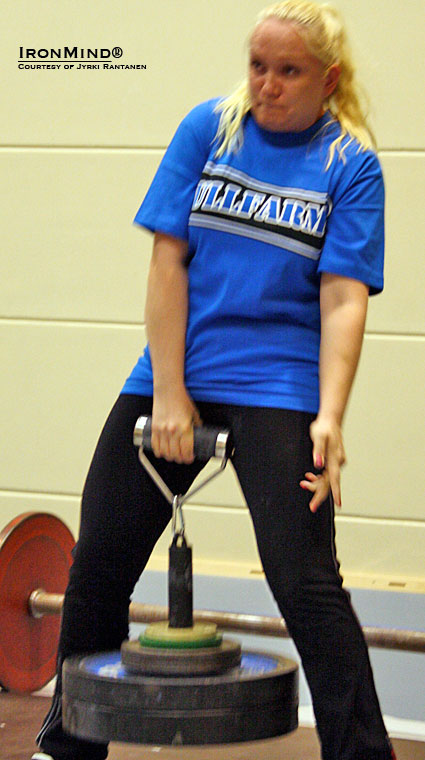 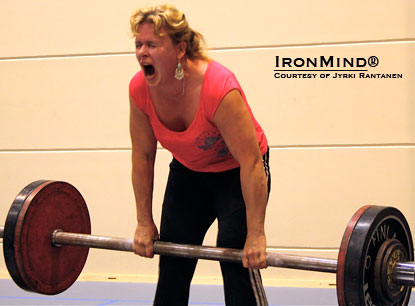 
Grippers were done without the card rule, so the results are not so comparable but Annina and Yvonne missed #2 just by 2mm (and #1.5's were so impressive, that I can claim them to be ready to attempt #2 with a card during 2012).

In men´s class the top 4 was doing a close match and in the end Juha Harju took the victory with 96 kg RT and 185 kg AA along with nice #3.5 in the grippers. Juha also attemp 191 kg AA as a new national record, but this time it was too much. The RT champion was Timo Lauttamus with new personal record of 98kg. Timo is also one rare piece of grip athlete—he can lift more than his bodyweight in RT.

The competition had a pro settings with background music, announcer etc. and we already discussed about the possibility to have bigger grip happening in Merikarvia in 2012. Big applause to the organizer Toni Kujala, who himself is a certified CoC #3 holder.